The Program: Inside the Mind of Keith Raniere and the Rise and Fall of NXIVM (Hardcover) 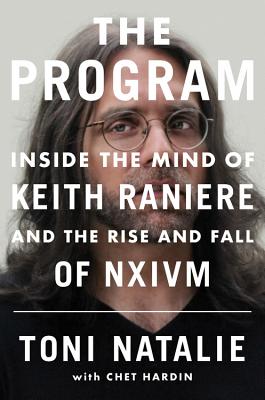 As seen in the HBO docuseries THE VOW: A jaw-dropping insider look into the world of the so-called "Hollywood Sex Cult" NXIVM chronicling the rise of enigmatic cult leader, Keith Raniere, from its "Patient Zero," his former girlfriend and test subject for his coercive control techniques.
Many have heard of NXIVM and its creator, Keith Raniere, the unassuming Albany man now prosecuted for ensnaring tens of thousands of people in the US, Mexico, Canada and elsewhere, to do his bidding and pay millions of dollars to participate in his self-improvement methodology. But where did Keith Raniere begin?

Enter Toni Natalie, Keith's Patient Zero, the first one indoctrinated into Raniere's methodology and the first one to escape. THE PROGRAM begins with the origin story of NXIVM, follows its rise to international prominence, and takes the reader into the downfall of Raniere through Toni's eyes. During this time she bore witness to the evolution of his methodology, including his use of sex, blackmail, and employment of psychological tools such as neuro-linguistic programming to control and punish those who would not heed his wishes. She uniquely details the fortunes lost and the lives left in disarray that she witnessed contemporaneously, including members of DOS, a group of women coerced into sexual acts under the guise of a "women's empowerment" inner circle, whom Raniere exercised extreme control over directly and through his lieutenants.

But far from being a victim's story, in the spirit of Erin Brockovich, Toni's is a nuanced narrative of a multi-dimensional woman saving herself, and then working tirelessly to help other women do the same for themselves. Today, Toni is happy, reunited with her son, and surrounded by friends and family--it is this perspective that makes her such a unique storyteller.

Toni Natalie spent eight years with Keith Raniere, as his girlfriend and business partner. She watched as Raniere transformed himself from a multi-level marketing guru into a vicious cult leader. When she finally did muster the strength to leave, Raniere doggedly pursued Toni with multiple litigations. Toni was the cautionary tale whispered into the ears of any member who sought to leave Raniere's side. This is Toni's tribute to the women and men who lost years, loved ones, and for some, their lives.

Award-winning investigative journalist Chet Hardin has been reporting on NXIVM and Keith Raniere from the start. He is the only journalist to play a midnight game of volleyball with actress Allison Mack, Seagram heiress Clare Bronfman, and the now-notorious Keith Raniere.