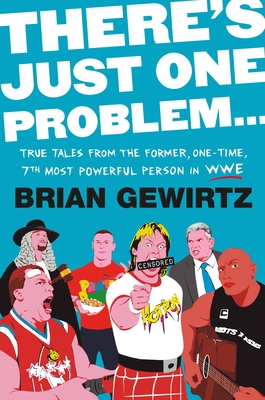 Former WWE head writer Brian Gewirtz brings readers behind the scenes for an unprecedented look at the chaotic, surreal, unbelievable backstage world of the WWE.

With untold stories from a career spanning over 15 years and featuring the biggest names and controversial moments in wrestling history, THERE'S JUST ONE PROBLEM is an honest, unflinching look on how an introverted life-long fan unexpectedly became one the most powerful men in all of professional wrestling.

For decades wrestling was shrouded in secrecy. It had larger than life personalities, bone crunching physicality and jaw-dropping theatrics but backstage it was an industry devoid of outsiders. Then in 1999, after working together on a special for MTV, Dwayne “The Rock” Johnson turned to 26-year old television writer Brian Gewirtz and asked “You ever consider writing for WWE?”  That question, and its answer, would have a profound effect on both of their lives for years to come.

THERE'S JUST ONE PROBLEM is a story about perseverance, tenacity, and steel chairs. Most writers in the WWE last for a matter of months; Gewirtz was there for over 15 years, writing some of most memorable and infamous storylines in WWE history (covering the “Attitude Era”, the “Ruthless Aggression Era” and into the “PG” and “Reality” eras).

Throughout this journey Gewirtz found himself becoming both friend and antagonist to some of the biggest names in WWE history – Stone Cold Steve Austin, John Cena, Stephanie McMahon, Bill Goldberg, Paul Heyman, Chris Jericho, Shawn Michaels, and the two men who he worked the most closely with WWE Chairman Vince McMahon and Dwayne “The Rock” Johnson.  These men not only shaped his life professionally but also personally, forcing him to grow and change both as a writer and a human being.

So how does a lifelong fan and outsider break through to become the ultimate insider?  How does a low-key personality deal directly with his boss, the most brash, unpredictable “alpha male” on the planet, WWE Chairman Vince McMahon? How does one gain respect in a locker room that wants nothing more than to see him disappear?  Where does one go when every year in wrestling takes you further away from the writing career you always wanted? Taking advice from his idol, the late “Rowdy” Roddy Piper, when you’re so full of fear, there’s only one way to push through: become fearless.

Current SVP of Development at Dwayne Johnson and Dany Garcia’s “Seven Bucks Productions”, Brian Gewirtz was a former writer for Vince McMahon’s World Wrestling Entertainment where he soon became the youngest and longest tenured Head Writer in the company’s history. He’s written on several television shows and has served as Executive Producer on NBC’s “The Titan Games”, the upcoming “Behind the Attraction” on Disney Plus” and on NBC’s “Young Rock” based on the life of Dwayne “The Rock” Johnson.

"Brian Gewirtz’s book THERE'S JUST ONE PROBLEM is a fascinating and hilarious inside look into Brian’s unlikely, yet incredible rise to sports entertainment “inside” fame and what I would describe as a true WWE Hall of Fame career as a writer and for years now, finding tremendous success as our lead Seven Bucks’ executive.
His long, storied and unbelievable tenure in WWE, is truly what legends are made of."—Dwayne "The Rock" Johnson

"Brian and I are kindred spirits. Amidst allegations of Flash action figure payola, the infamous wrestlers court, multitudes of laughs, made-up words, 5 second poses, roasting local sports teams and battling at WrestleMania in my hometown over a Japanese shampoo endorsement (you knew I had to mention it), we’ve both ended up where we needed to be. Keep the world smiling, Brian. As you do in this book. Wrestling’s version of War and Peace. Or a great, comedic book that involves writing outlandish scenarios for men in tights. Whichever. I’ll be over here still wearing spandex."—Adam "Edge" Copeland, Canadian professional wrestler and actor

“This is the best book I have read in years. If you’re a fan of WWE, or heck, even if you’re not, this inside look into the life of one of the most intense jobs in all of entertainment, a WWE writer, hilariously detailed by one of the most impactful writers and creative contributors in WWE  history is nothing short of fascinating. It’s a laugh out loud, can’t put down, sad that it’s over kind of book and I loved every second of it. Apart from, of course, when it was over.”—Becky Lynch, WWE Superstar and six-time WWE Women’s Champion

“In the book, THERE'S JUST ONE PROBLEM, written by the most talented writer in the history of the WWE, Brian Gewirtz (my opinion), Brian takes you on a roller coaster ride in regards to his amazing time writing in the WWE. Brian even discusses his “day” in wrestlers court, where he was the first and only writer in WWE to have to go in front of a judge (actually a wrestler) and pay his debt for “allegedly” favoring to write for his favorite wrestlers. He survived!!! This book is as entertaining as the scripts Brian wrote during his amazing career in the WWE. This book is a must read.”—Kurt Angle, WWE Hall of Famer and Olympic Gold Medalist

"I simply could not put this tremendous book down, finishing it in two sittings within a single day—and lost count of how many times I laughed out loud along the way. Brian Gewirtz has an instant wrestling classic on his hands here; a very enjoyable romp down memory lane, with a unique perspective from a man who was either in the middle of, or very close to some of the greatest (and not so great) moments in WWE history. With unfettered access to WWE boss Vince McMahon, and as one of Dwayne 'The Rock' Johnson’s closest confidants, Brian Gewirtz is the perfect person to chronicle the hectic and sometimes surreal behind-the-scenes chaos of the WWE creative process—and he delivers the goods in insightful and hilarious fashion."—Mick Foley, WWE Hall of Famer and multi-time New York Times bestselling author

"Every wrestling fan will love this book. The stories are truly amazing! I couldn't put it down."—Ken Jeong, stand-up comedian, actor, producer, and writer

"I never met someone in the wrestling business that wasn’t a wrestler that had as much knowledge and insight as Brian. There would not be a King Bookah without a Brian Gewirtz."—Booker T, WWE Hall of Famer and five-time WCW Champion

"An entertaining look at life backstage beyond the ropes."—Kirkus