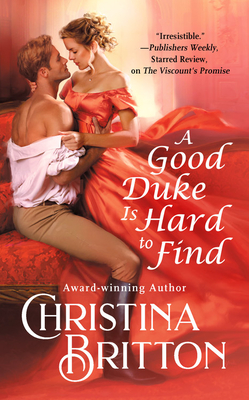 By Christina Britton
$8.95
Not Available

This is book number 1 in the Isle of Synne series.

Fans of Netflix's Bridgerton series will be swept away by a Regency romance of broken engagements, second chances, and stolen kisses from the author whom Publishers Weekly calls "irresistible".
After her third fiancé leaves her at the altar, Lenora Hartley is beginning to think she's cursed. One thing's for certain: she needs to escape London and her father's tyrannical attempts to find her yet another suitor. The Isle of Synne, an isolated and idyllic retreat off Britain's northern coast, is blessedly far from society's gossip, but it also carries haunting reminders of her first fiancé. Letting go of the past to find happiness seems impossible -- until Lenora is thrown in the path of a gruff, mysterious blue-eyed man who makes her pulse race.

Next in line for a dukedom he doesn't want to inherit, Peter Ashford is only on the isle to exact revenge on the man who is responsible for his mother's death. Once he's completed the task, he'll return to America where his life can finally be his own. Yet when he meets the beautiful and kind Miss Hartley, he can't help but be drawn to her. Can Peter put aside his plans for vengeance for the woman who has come to mean everything to him?

Christina Britton developed a passion for writing romance novels shortly after buying her first at the tender age of thirteen. Though for several years she put brush instead of pen to paper, she has returned to her first love and is now writing full time. She spends her days dreaming of corsets and cravats and noblemen with tortured souls. She lives with her husband and two children in the San Francisco Bay Area. To learn more, visit:ChristinaBritton.comTwitter: @CBrittonAuthorFacebook.com/ChristinaBrittonAuthor

"Britton (A Match Made in London) imbues her irresistible couple with impressive psychological depth, and the charming supporter characters of cunning Lady Olivia and rascally Quincy, Peter's best friend, steal every scene they're in. Readers will be hooked."—Publishers Weekly

"I'd read another Britton book in a heartbeat."—Minerva Spencer on With Love in Sight