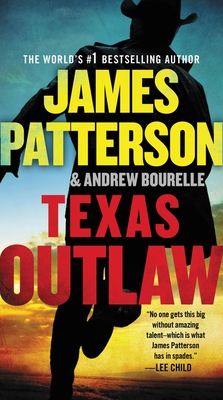 By James Patterson, Andrew Bourelle (With)
$9.99

This is book number 2 in the A Texas Ranger Thriller series.

To Rory Yates being a Texas Ranger is about justice, but all of that changes when he is brought to a small southern town to help uncover the mysteries behind a local woman's death—only to discover corruption and lies.

Texas Ranger Rory Yates is not keen for hero status. But it's unavoidable once his girlfriend, country singer Willow Dawes, writes a song about his bravery. Rory escapes his newfound fame when he's sent to the remote West Texas town of Rio Lobo, a municipality with two stoplights. And now, according to the Chief of Police, it has one too many Texas Rangers.

Rio Lobo Detective Ariana Delgado is the one who requested Rory, and the only person who believes a local councilwoman's seemingly accidental death is a murder. Then Rory begins to uncover a tangle of small-town secrets, favors, and lies as crooked as Texas law is straight.

To get to the truth before more people die, Rory is forced to take liberties with the investigation. The next ballad of Rory Yates may not be about a hero, but rather an outlaw song.

James Patterson is the world's bestselling author and most trusted storyteller. He has created many enduring fictional characters and series, including Alex Cross, the Women's Murder Club, Michael Bennett, Maximum Ride, Middle School, and I Funny. Among his notable literary collaborations are The President Is Missing, with President Bill Clinton, and the Max Einstein series, produced in partnership with the Albert Einstein Estate.

Patterson's writing career is characterized by a single mission: to prove that there is no such thing as a person who "doesn't like to read," only people who haven't found the right book. He's given over three million books to schoolkids and the military, donated more than seventy million dollars to support education, and endowed over five thousand college scholarships for teachers. For his prodigious imagination and championship of literacy in America, Patterson was awarded the 2019 National Humanities Medal. The National Book Foundation presented him with the Literarian Award for Outstanding Service to the American Literary Community, and he is also the recipient of an Edgar Award and nine Emmy Awards. He lives in Florida with his family.
Andrew Bourelle is the author of the novel Heavy Metal and the coauthor with James Patterson of Texas Ranger.