Every Man a King: A Short, Colorful History of American Populists (Hardcover) 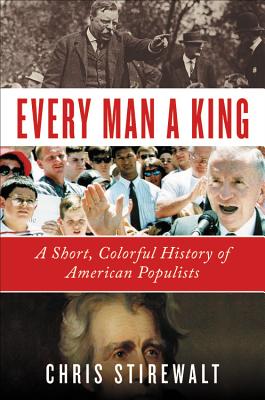 By Chris Stirewalt
$31.36
Not Available

Whatever the ideological fad of the moment, American populism has always been home to a fascinating assortment of charismatic leaders, characters, kooks, cranks, and sometimes charlatans who have - with widely varying degrees of success - led the charge of ordinary folks who have gotten wise to the ways of the swamp. This attitude of skeptical resentment also makes populism a fertile field for the work of conspiracy theorists and other enthusiastic apostates from civic convention. After all, if the people in power are found to be rigging one part of the system, why not the rest? Every Man a King tells the stories of America's populist leaders, from an elderly Andrew Jackson brutally caning his would-be-assassin, to William Jennings Bryan's pre-speech routine that combined equally prodigious quantities of prayer and food, to Ross Perot's military-style campaign that made even volunteers wear badges with stars to show rank. It is a rollicking history of an American attitude that has shaped not only our current moment, but also the long struggle over who gets to define the truths we hold to be self evident.

Chris Stirewalt joined Fox News Channel (FNC) in July of 2010 and serves as politics editor based in Washington, D.C. Stirewalt authors the daily Fox News Halftime Report political news note and co-hosts the hit podcast, Perino & Stirewalt: I'll Tell You What. He is also the host of Power Play, a feature video series on FoxNews.com.

"President Trump likes to say that America has 'never seen' a movement like his before. This is both true and false. America has seen and been transformed by many populist movements almost since its founding. But each one is distinct, because each one arises from its own unique moment in history. In easily-and enjoyably!-digestible bites Chris Stirewalt gives us a wonderful tasting menu of American populism from Andrew Jackson to Ross Perot, illuminating the differences and commonalities along the way. Every Man a King is a great introduction to one of the most under-appreciated and
relevant issues of our day."—Jonah Goldberg, bestselling author of Suicide of the West

"A wonderfully absorbing and informative book, stylishly written and full of fact and humor. I had great fun reading it, and so will you."—Brit Hume, Fox News senior political analyst

"Chris Stirewalt believes history should be told as a story-and I'll tell you what, he sure can write one. Every Man a King is a gallop through America's populist history that helps everything make a lot more sense. Chris has a wonderful way with words. It is a pleasure to read and to learn from him. I recommend his debut book highly and can't wait to discuss it with his many fans."
—Dana Perino, bestselling author of And The Good News Is... and host of The Daily Briefing

"Chris Stirewalt is the best pundit in America. Period. Now he's written his first book, and it's even better, smarter, and funnier than his TV appearances. Turns out he's a helluva writer, too. Who knew?"

"Populists can be destabilizers who threaten order and tap into dark impulses. They can also be a ton of fun. Add all of it together and you get Chris Stirewalt's Every Man A King, a clear-eyed survey of this uniquely American species that is also one exhilarating romp of a read."—Steve Kornacki, NBC and MSNBC News, author of The Red and The Blue