Two Chances with You (The Rome Novels #2) (Paperback) 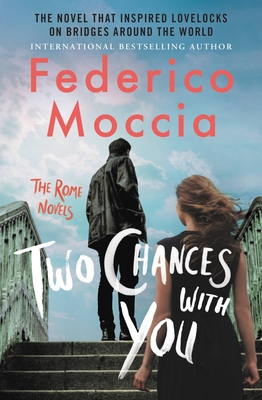 By Federico Moccia, Antony Shugaar (Translated by)
$16.99
Not Available

This is book number 2 in the The Rome Novels series.

THE NOVEL THAT INSPIRED LOVELOCKS ON BRIDGES AROUND THE WORLD
In this second novel about the "deep, passionate romance that transcends time and age" (Booklist), Federico Moccia delights readers with an enchanting novel about making wishes, second chances at love, and following dreams. After leaving Rome with a broken heart, Step Mancini returns from America two long years later. He’s told himself that he’s put his first love behind him, but now that he’s home, he can no longer deny his need to see Babi Gervasi again. So he’s completely blindsided when he finds himself trading flirtatious barbs with fledgling actress Ginevra Biro.  Bold, streetwise, and funny, Gin is everything that Babi is not.  She offers Step a new beginning, a second chance at the love of a lifetime.

But even his romance with Gin can’t completely erase the past.  Trouble still follows his friends, and he and his mother remain estranged.  For now he can outrun his problems as he and Gin discover Rome together, from Capitoline Hill to the Ponte Milvio bridge, where the pair attach a padlock to the lamppost  and throw the key into the Tiber River, ensuring that their love will last forever.

But forever is a very long time. And their love is about to be tested.

Federico Moccia is one of Italy's publishing phenomenons, and his emotional stories have been compared to the works of Nicholas Sparks and John Green. The first two Babi and Step books were blockbuster bestsellers in Italy, spending three full consecutive years on the Nielsen bestseller list. His books have been published in fifteen languages worldwide and have sold over ten million copies, and there are feature films in Italian and Spanish based on the first two books in the trilogy.
Learn more at:FedericoMoccia.esTwitter @FedericoMocciaFacebook.com/FedericoMocciaOfficial
Antony Shugaar is a translator and writer who lived for many years in Italy, France, and Spain. He has received two translation fellowships from the National Endowment for the Arts. He has translated close to forty books for Europa Editions and has worked for many of the most prestigious publishers, trade and academic, in the US and the UK. He has translated extensively for the New York Review of Books and has written for the New York Times, the Times of London, and many other publications.

"Readers who enjoy roller-coaster emotions and books by Cecelia Ahern will enjoy this read."—Booklist

"Federico Moccia is the romance king of the Mediterranean bestseller."—Woman (Spain)

"Federico
Moccia is an author who writes about love, and he wins the hearts of a broad
and diverse audience - the teenagers of today and the teenagers of yesteryear."—la Repubblica (Rome newspaper)

"Federico Moccia is a household name for millions of readers."—Revista Universitarios (Spain)

"Federico Moccia knows how to get straight to the heart of all young readers. His words always hit the right spot."—TTL (Italian newspaper)

"With his novels, the writer Federico Moccia has revolutionized young people."—Glamour

"The Roman writer has managed to connect with an audience who have become dedicated fans and who are eager to read his novels, great romances with vital teachings."—El Pais (Spain)

"His novels of young love are sold by millions around the world."—El Mundo (Spain)