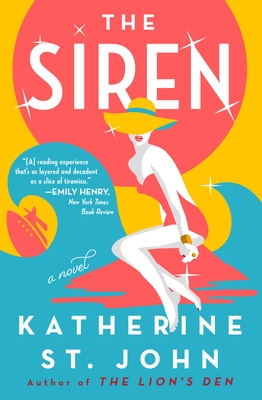 From Katherine St. John, author of The Lion's Den, comes a "reading experience that’s as layered and decadent as a slice of tiramisu" about a Hollywood heartthrob, his co-star ex-wife, and a film set on an isolated island that will unearth long-buried secrets—and unravel years of lies (Emily Henry, NYT bestselling author of People We Meet on Vacation, New York Times Book Review).
​
In the midst of a sizzling hot summer, some of Hollywood's most notorious faces are assembled on the idyllic Caribbean island of St. Genesius to film The Siren, starring dangerously handsome megastar Cole Power playing opposite his ex-wife, Stella Rivers. The surefire blockbuster promises to entice audiences with its sultry storyline and intimately connected cast.

Three very different women arrive on set, each with her own motive. Stella, an infamously unstable actress, is struggling to reclaim the career she lost in the wake of multiple, very public breakdowns. Taylor, a fledgling producer, is anxious to work on a film she hopes will turn her career around after her last job ended in scandal. And Felicity, Stella's mysterious new assistant, harbors designs of her own that threaten to upend everyone's plans.

With a hurricane brewing offshore, each woman finds herself trapped on the island, united against a common enemy. But as deceptions come to light, misplaced trust may prove more perilous than the storm itself.

Katherine St. John is a native of Mississippi and graduate of the University of Southern California who spent over a decade in the film industry as an actress, screenwriter, and director before penning her first novel, The Lion's Den. When she's not writing, she can be found hiking or on the beach with a good book. Katherine currently lives in Atlanta with her husband and two daughters.

"If there’s one word to describe The Siren, it’s this: salacious . . . A reading experience that’s as layered and decadent as a slice of tiramisu . . . The sense of foreboding grows alongside the threat of a hurricane hitting the film’s shooting location in the Caribbean. If you put The Seven Husbands of Evelyn Hugo, Gone Girl and Big Little Lies into a blender, you might get The Siren—pulpy and scandalous enough to compete with a glossy-paged gossip rag, but with brisk, lucid writing.”—Emily Henry, New York Times bestselling author of Beach Read and People We Meet on Vacation, New York Times Book Review

"The Siren by Katherine St. John is more than a juicy insight into Hollywood and its enigmatic stars; it's a wry look at the bright lights of fame that can both illuminate and incinerate. Alternating viewpoints of the three strong female protagonists are interspersed with news flashes and insider gossip allowing the reader to get inside the heads of each narrator, and to gather the careful clues and red herrings St. John expertly drops along the way. The exotic Caribbean setting and conflicted characters coupled with an edge-of-your-seat stormy climax makes this a book you will struggle to put down."—Karen White, New York Times bestselling author of The Last Night in London

“The Siren may start as a gossipy peek behind the scenes of a high-stakes movie shoot, but it quickly spins into an unflinching portrait of the politics of truth and deception in Hollywood.”—Heather Cocks and Jessica Morgan, bestselling authors of The Royal We and The Heir Affair

"A deliciously tantalizing read that immediately sucks you in. When people call something a page turner, this is what they mean! I couldn't put The Siren down and I didn't want to give it up when it was over."—Abby Jimenez, USA Today bestselling author of Life's Too Short

"Behind the glitz and glamour lie some truly dark secrets. The cast of actors and actresses made fabulously deceptive characters who kept me guessing right the way through. The Siren is a captivating mystery with a glamorous Caribbean setting and one of the most original and fascinating villains I've come across."—Allie Reynolds, author of Shiver

"The Seven Husbands of Evelyn Hugo on a beach, this shimmering jewel of a novel shares the captivating stories of three women navigating the rocky shores of modern-day Hollywood."—Eliza Jane Brazier, author of If I Disappear

"The novel’s author, Katherine St. John, has delivered the goods . . . Shocking revelations, intrigue, murder, and a hurricane are all
in the mix. It’s hell and high water. And a high old time." —Wall Street Journal

“A sudsy, savvy takedown of the Hollywood dream machine.”—People

"[A] superb tale of revenge and unbridled ego . . . The scene is set for action, intrigue, murder, and heart-stopping adventure. St. John keeps readers deliciously off-balance with each new revelation about the characters and their motives, as revealed through the alternating viewpoints of Stella, Felicity, and Taylor. This is pure, riveting entertainment."—Publishers Weekly (Starred Review)