The Bidens: Inside the First Family's Fifty-Year Rise to Power (Paperback) 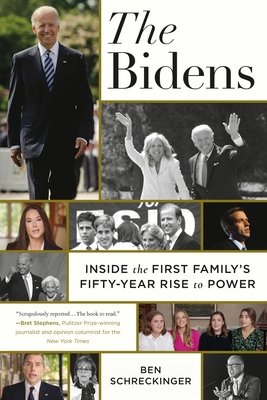 The deeply reported exploration of Joe Biden as told through his extended family, now in paperback.

Coming off of the 2020 election, THE BIDENS tells the Biden Family story in full, from the secrets lurking in the deep recesses of Joe's family tree to his son Hunter's foreign deal-making spree—and the Trump gang's ham-handed efforts to exploit it.

​On November 3, Americans did not just elect Joe Biden: They got a package deal. The tight-knit Biden family—siblings, children, in-laws, and beyond—is coming right along with him. They are sure to play a defining role in his presidency, just as they have in every other one of his endeavors.
Inside, you’ll find these and other stories and revelations about the Biden family, including: Like the Kennedys before them, the Bidens are a tight-knit, idealistic Irish Catholic clan with good looks, dynastic ambitions, and serious personal problems.

As THE BIDENS reveals, the best way to understand Joe Biden—his values, fears, and motives—is to understand his family: Their Irish (and not-so-Irish) roots, their place in the Delaware pecking order, their dodgy business deals, and their personal struggles and triumphs alike.

Ben Schreckinger is a national political correspondent at POLITICO. Before that, he served as GQ's Washington correspondent and covered the rise of Donald Trump as a campaign reporter for POLITICO. He has also written on politics, economics, culture and their intersections for Slate, Newsweek, the Atlantic, the Boston Globe, Boston Magazine, and the Financial Times, from Boston, Ireland, and Burma. He has appeared on CNN, MSNBC, NPR and the BBC, among others.

"Ben is one of the most savvy political observers and most entertaining writers of his generation—the Hunter S. Thompson of the Trump era. His reporting is second-to-none and his writing sparkles with insights about the most important figures of our time."—Garrett M. Graff, New York Times bestselling author of THE ONLY PLANE IN THE SKY

"Ben Schreckinger takes us deep into the Biden family story, separating myth from reality and showcasing a clan that's rightly been called 'the middle-class Kennedys.' A must-read for those interested in the intersection between politics and personal history."—Peter S. Canellos, author of THE GREAT DISSENTER: The Story of John Marshall Harlan, America's Judicial Hero

"No journalist has spent more time in recent years studying and scrutinizing the Biden family than Ben Schreckinger. This book provides a singular look into the life of a president—and how it was shaped by the tragedies, scandals, and triumphs of his loyal Irish clan."—Tim Alberta, bestselling author of AMERICAN CARNAGE

"Perhaps our youngest political reporter, also one of our most talented."—Susan Glasser, co-author of THE MAN WHO RAN WASHINGTON

“An important book…Kudos to him for reporting facts most in the corporate media don't want to hear.”—Glenn Greenwald, Pulitzer Prize and George Polk Award-winning investigative journalist