The Museum of Ordinary People (Paperback) 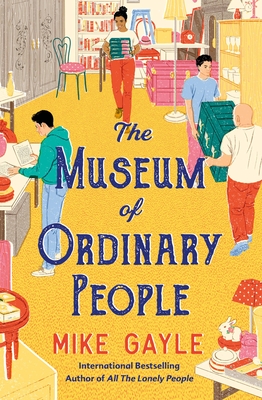 In this “brilliantly original” and warmhearted novel, an old set of encyclopedias leads a young woman to a curious museum and one profoundly moving lesson: that every life is an extraordinary life (New York Times bestselling author Claire Mackintosh).

Still reeling from the sudden death of her mother, Jess is about to do the hardest thing she's ever done: empty her childhood home so that it can be sold.  As she sorts through a lifetime of memories, everything comes to a halt when she comes across something she just can’t part with: an old set of encyclopedias.  To the world, the books are outdated and ready to be recycled.  To Jess, they represent love and the future that her mother always wanted her to have.

In the process of finding the books a new home, Jess discovers an unusual archive of letters, photographs, and curious housed in a warehouse and known as the Museum of Ordinary People.  Irresistibly drawn, she becomes the museum's unofficial custodian, along with the warehouse’s mysterious owner.  As they delve into the history of objects in their care, they not only unravel heart-stirring stories that span generations and continents, but also unearth long-buried secrets that lie closer to home.

Inspired by an abandoned box of mementos, The Museum of Ordinary People is a poignant novel about memory and loss, the things we leave behind, and the future we create for ourselves.

Mike Gayle was born and raised in Birmingham, UK.  After earning a Sociology degree, he moved to London to become a journalist and ended up as an advice columnist for a teenage girls' magazine before becoming Features Editor for another teen magazine. He has written for a variety of publications including the Sunday Times, the Guardian, and Cosmo. Mike became a full- time novelist in 1997 and has written thirteen novels, which have been translated into more than thirty languages.  After stints in London and Manchester, Mike now resides in Birmingham with his wife, two kids, and a rabbit.