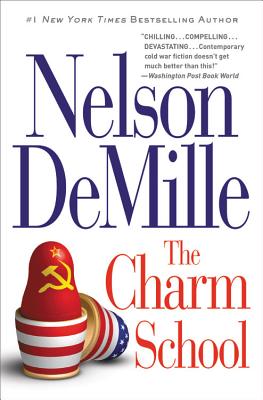 "True master" and #1 New York Times bestselling author Nelson DeMille presents a chilling, relentlessly suspenseful story of Cold War espionage perfect for fans of the hit FX show The Americans (Dan Brown).
On a dark road deep inside the Russian woods at Borodino, a young American tourist picks up an unusual passenger with an explosive secret: an U.S. POW on the run from "The Charm School," a sinister operation where American POWs teach young KBG agents how to be model U.S. citizens. Their goal? To infiltrate the United States undetected. With this horrifying conspiracy revealed, the CIA sets an investigation in motion, and three Americans--an Air Force officer, an embassy liaison, a CIA chief--pit themselves against the country's enemies in a high-powered game of international intrigue.

Before launching his forty-year writing career, he was a U.S. Army lieutenant who served in the Vietnam War as an infantry platoon leader with the First Calvary Division. During his service in Southeast Asia from 1967-1968, he was decorated with numerous awards including the Air Medal, Bronze Star, and the Vietnamese Cross of Gallantry.

He currently resides on Long Island with his family.

"A marvelous contemporary writer with something to say, something as rare as it is rewarding."—New York Daily News

"A master at keeping the reader hanging on to see what happens next."
—The Associated Press

"A master of the unexpected...an accomplished and incredibly versatile storyteller."—Cleveland Plain Dealer

"No one will stop reading or even pause for the last 100 pages."
—-Boston Herald

"A harrowing journey to the heart of totalitarian darkness."
—Washington Post Book World