A Taste of History Cookbook: The Flavors, Places, and People That Shaped American Cuisine (Hardcover) 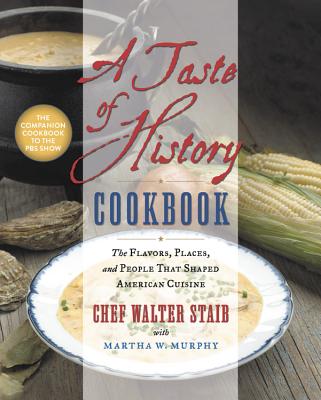 The delicious, informative, and entertaining cookbook tie-in to PBS's Emmy Award-winning series A Taste of History.

A TASTE OF HISTORY COOKBOOK provides a fascinating look into 18th and 19th century American history. Featuring over 150 elegant and approachable recipes featured in the Taste of History television series, paired with elegantly styled food photography, readers will want to recreate these dishes in their modern-day kitchens. Woven throughout the recipes are fascinating history lessons that introduce the people, places, and events that shaped our unique American democracy and cuisine. For instance, did you know that tofu has been a part of our culture's diet for centuries? Ben Franklin sung its praises in a letter written in 1770!

With recipes like West Indies Pepperpot Soup, which was served to George Washington's troops to nourish them during the long winter at Valley Forge to Cornmeal Fried Oysters, the greatest staple of the 18th century diet to Boston's eponymous Boston Cream Pie, A TASTE OF HISTORY COOKBOOK is a must-have for both cookbook and history enthusiasts alike.

Walter Staib is the chef and James Beard-nominated owner of the historic City Tavern restaurant in Philadelphia. Chef Staib has prior worked at such top European dining spots as Hotel Post, a historic five-star hotel in Germany's Black Forest region, and the Chessery in Switzerland, one of Europe's premier resorts. He is the host and chef behind the Emmy Award-winning PBS television series A Taste of History and has appeared on the Today show, 60 Minutes, Iron Chef, The Best Thing I Ever Ate, and others. He is the author of several books about American cooking and baking, and has a passion for historic American cuisine, for which he is determined to share with home cooks everywhere.