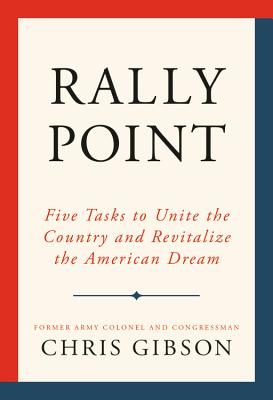 A smart and surprising political inventory for how America can reunite and revitalize in a time of crisis.

Written by an admired leader of the Republican party, Rally Point: Five Tasks to Unite the Country and Revitalize the American Dream looks past the 2016 election, past the finger pointing and conventional political thinking, to focus on clear, primary principles that conservatives must debate and defend to protect the future of America.

Raised in a working-class family in upstate New York, the first in his family to go to college, paid for in part by his service in the National Guard, Chris Gibson rose from Private to Colonel in the Army, including combat command in the storied 82nd Airborne Division. RALLY POINT is his story: what he's learned from the "School of Hard Knocks" and how he's applied those precious life lessons during his service in Iraq and in Congress.

Drawn from a deep appreciation of history and American exceptionalism, Gibson provides incisive and frank analysis of the current political environment, including President Trump, and provides a roadmap based on time-tested Founding principles to help unite our country and revitalize the American Dream. RALLY POINT is a thoughtful, compelling, enjoyable read - a must for serious-minded Americans looking for answers in this challenging political environment.

Chris Gibson has over thirty-five years of distinguished public service. He has spent the last six years as a member of the U.S. House of Representatives (NY-19). He also spent twenty-nine years in the U.S. Army, where he rose to the rank of colonel and commanded the 82nd Airborne Division's 2nd Brigade. He served four combat tours in Iraq and was awarded four Bronze Star Medals and the Purple Heart.

"Chris Gibson served our country with honor and distinction, both in uniform and in Congress. While we have a different approach to solving some of our country's challenges, we share the critical principle that service to our country and the well-being of the American people must come before partisan politics . . . a timely message of unity for a divided nation."—p.p1 {margin: 0.0px 0.0px 0.0px 0.0px; text-align: center; font: 12.0px Arial}Tulsi Gabbard, U.S. representative (HI)

"RALLY POINT is an important read about how we can rekindle the American Dream, written by a man who has dedicated his life to public service. From his combat days serving in the U.S. Army to his three terms in the U.S. House of Representatives, Chris's wealth of experience on the most important issues facing our country has given him invaluable insight to chart a practical path forward that can unite our country."—p.p1 {margin: 0.0px 0.0px 0.0px 0.0px; font: 12.0px Arial}Elise Stefanik, U.S. representative (NY)

"Chris Gibson has done a masterful job of laying out the enormous challenges we face as a nation, then showing us a practical way forward. Beautifully written, with powerful examples -- from baseball to combat, from family to politics -- it's an inspiring roadmap for a better future."—p.p1 {margin: 0.0px 0.0px 0.0px 0.0px; text-align: center; font: 12.0px Arial}Chris Stewart, New York Times bestselling author

"Thoughtful insights on contemporary America and moving our country forward from a man with an inspiring story of rising from blue-collar roots to become a proven leader for our nation, from the battlefields of Iraq to the halls of Congress."—p.p1 {margin: 0.0px 0.0px 0.0px 0.0px; text-align: center; font: 12.0px Arial}Dan Lipinski, U.S. representative (IL)

"A leader of character in uniform and on the Hill, Chris Gibson details the drift underway from our nation's founding principles and values; more importantly, he offers alternatives to better align with our forefathers' founding vision. He calls upon us all as citizens to step up and be counted . . . a resounding call to action."—p.p1 {margin: 0.0px 0.0px 0.0px 0.0px; text-align: center; font: 12.0px Arial}General Dan Allyn, U.S. Army (retired), former vice chief of the Army