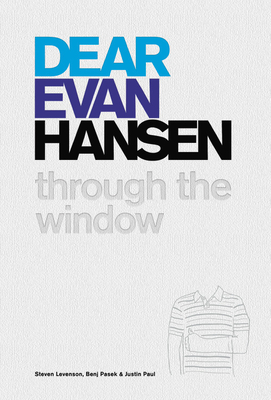 The book-produced by Melcher Media, the team behind Hamilton, Wicked, Rent, and many more-tells the story of the musical from its conception nearly a decade ago to the Broadway stage. From developing the idea to writing the show, composing, casting, and rehearsals, Dear Evan Hansen appeals to fans far and wide offering them the opportunity to continuously revisit the show, and for those who haven't seen the musical, reading the book will make them feel like they have.

Filled with interviews with the cast and crew, original behind-the-scenes photography, a deeper look into Evan's fictional world and the visual world of the show, unreleased lyrics, and of course the libretto, as well as reflections on the creators own formative memories from their adolescence as it relates to the show's themes, and important examinations of how we present ourselves online and mental health, Dear Evan Hansen is a beautifully produced, thoughtful, and uplifting book.

Benj Pasek & Justin Paul wrote the music and lyrics for Dear Evan Hansen. In 2017, they won an Academy Award for Best Original Song for their lyrics in "City of Stars" from La La Land. Their musical Dogfight had its world premiere at Second Stage Theatre, where it won the Lortel Award for Best New Musical. Other theater credits include A Christmas Story, The Musical on Broadway, which received Tony, Drama Desk, and Outer Critics Circle nominations for Outstanding New Broadway Musical; James and the Giant Peach; and Edges. TV credits include Smash, Sesame Street, and Johnny and the Sprites. Upcoming film projects include The Greatest Showman,Trolls, Medusa, and Tom and Jerry Return to Oz. Honors include the Richard Rodgers Award for Musical Theatre (American Academy of Arts and Letters), the ASCAP Richard Rodgers New Horizons Award, and the Jonathan Larson Award. Both are BFA Musical Theatre graduates of the University of Michigan and members of the Dramatists Guild of America, Inc.