A Walk to Remember (Paperback) 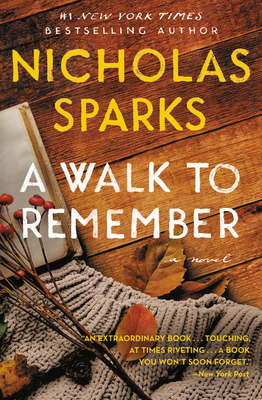 A high school rebel and a minister's daughter find strength in each other in this star-crossed tale of "young but everlasting love" (Chicago Sun-Times).There was a time when the world was sweeter....when the women in Beaufort, North Carolina, wore dresses, and the men donned hats.... Every April, when the wind smells of both the sea and lilacs, Landon Carter remembers 1958, his last year at Beaufort High. Landon had dated a girl or two, and even once sworn that he'd been in love. Certainly the last person he thought he'd fall for was Jamie, the shy, almost ethereal daughter of the town's Baptist minister....Jamie, who was destined to show him the depths of the human heart-and the joy and pain of living. The inspiration for this novel came from Nicholas Sparks's sister: her life and her courage. From the internationally bestselling author Nicholas Sparks, comes his most moving story yet....

With over 100 million copies of his books sold, Nicholas Sparks is one of the world's most beloved storytellers. His novels include sixteen #1 New York Times bestsellers, and all of his books, including Three Weeks with My Brother, the memoir he wrote with his brother, Micah, have been New York Times and international bestsellers, and were translated into more than fifty languages. Eleven of Nicholas Sparks's novels -- The Choice, The Longest Ride, The Best of Me, Safe Haven, The Lucky One, The Last Song, Dear John, Nights in Rodanthe, The Notebook, A Walk to Remember, and Message in a Bottle -- have been adapted into major motion pictures.