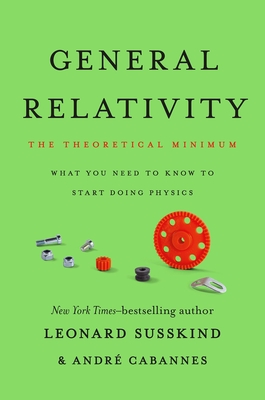 He taught us classical mechanics, quantum mechanics, and special relativity. Now, physicist Leonard Susskind, assisted by a new collaborator, André Cabannes, returns to tackle Einstein’s general theory of relativity. Starting from the equivalence principle and covering the necessary mathematics of Riemannian spaces and tensor calculus, Susskind and Cabannes explain the link between gravity and geometry. They delve into black holes, establish Einstein field equations, and solve them to describe gravity waves. The authors provide vivid explanations that, to borrow a phrase from Einstein himself, are as simple as possible (but no simpler).

An approachable yet rigorous introduction to one of the most important topics in physics, General Relativity is a must-read for anyone who wants a deeper knowledge of the universe’s real structure.

Leonard Susskind is the Felix Bloch Professor in Theoretical Physics at Stanford University. He is the author of Special Relativity and Classical Field Theory and Quantum Mechanics (with Art Friedman), and the New York Times-bestselling The Theoretical Minimum (with George Hrabovsky), among other books. He lives in Palo Alto, California.

André Cabannes holds a PhD in statistics from Stanford University. He was a lecturer in mathematics at the Massachusetts Institute of Technology before turning to management consultancy and entrepreneurship, where among other things he was the translator of the Theoretical Minimum series into French. He lives in France.