The Peking Express: The Bandits Who Stole a Train, Stunned the West, and Broke the Republic of China (Hardcover) 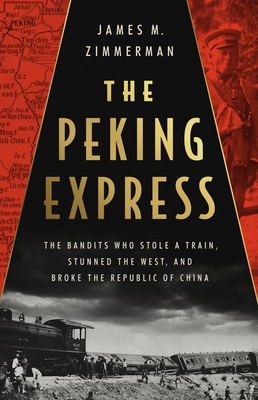 The thrilling true story of train-robbing revolutionaries and passengers who got more than they paid for.

In 1923 Shanghai, native and foreign travelers alike are enthralled by the establishment of a new railway line to distant Peking. With this new line comes the Peking Express, a luxurious express train on the cutting edge of China’s continental transportation.

Among those drawn to the train are oil heiress Lucy Aldrich, journalist John Benjamin Powell, and vacationing Army Majors Roland Pinger and Robert Allen, wives and children in tow. These errant Americans and their eclectic fellow passengers all eagerly anticipate an idyllic overnight journey in first class.

But the train’s passengers are not the only ones enchanted by the Peking Express. The bandit revolutionary Sun Mei-yao sees in it the promise of a reckoning long overdue. From his vantage in Shantung Province, a conflict-ravaged region through which the train must pass, he identifies the Peking Express as a means of commanding the global stage. By disrupting the train and taking its wealthy passengers hostage, he can draw international attention to the plight of Shantung and, he hopes, thereby secure a solution.

In the first hours of May 6, 1923, Sun and his bandit troops enact their daring plan. Wrested from the pleasures of their luxury cabins, dozens of travelers including Aldrich, Powell, Pinger, and Allen are plunged into the unfamiliar Shantung terrain. Pursued by warlords and led by their captors, they must make their way to the bandits’ mountain stronghold and there await their fate.

The Peking Express is the incredible, long-forgotten story of a hostage crisis that shocked China and the West. It vividly captures the events that made international headlines and later inspired Josef von Sternberg’s 1932 Hollywood masterpiece Shanghai Express.

James M. Zimmerman is a Beijing-based lawyer who has lived and worked in China for over 25 years. He is among China's leading foreign lawyers and represents companies and individuals confronted with the political and legal complexities of doing business in Mainland China. He is the author of the China Law Deskbook, published by the American Bar Association, and is frequently featured as a political commentator on US-China relations in various print and broadcast media around the globe. He is the former four-term Chairman of the American Chamber of Commerce in China. In addition to Beijing, he maintains a home in San Diego, California.

“The Peking Express is a fascinating story, and the author has done an amazing amount of research. It’s really an intriguing, impressive work.”

—Ian Johnson, Pulitzer Prize-winning journalist and author of The Souls of China

“The Peking Express is a vivid, exhilarating account of China’s greatest train robbery of the early twentieth century. A true story about bandits, kidnapping, forced marches across the countryside, a pursuing Chinese army, diplomatic intrigue, and a cast of rather unique characters in 1923 China—what’s not to love???”—Paul French, author of Midnight in Peking and City of Devils

“The Peking Express is a dramatic story of survival, heroism, and political intrigue. It takes the reader from the bustling cosmopolitan city of Shanghai to the impoverished, rural landscape of the mysterious and breathtakingly beautiful mountains of southern Shandong. Zimmerman delivers a gripping account that captivates the reader from beginning to end—an ending that is both climatic and riveting in its description of the horrors and excesses of China’s Warlord Era. This is a book that readers will never forget!”—Lingling Wei, award-winning journalist; chief China correspondent, the Wall Street Journal; and coauthor of Superpower Showdown

“After a diet of turgid perorations by Xi Jinping, a reader needs relief. Zimmerman’s tale of the 1923 hijacking of the Peking Express is just such an antidote. Not only has he done his research, but he spins a helluva good yarn!”—Orville Schell, author of My Old Home

“The Peking Express takes readers on a journey across China’s countryside where a train robbery opens windows onto the tumultuous politics of twentieth-century China. Painting lively portraits of heroes, villains, saviors, and victims—but which was which?—Zimmerman tells a story that sets the stage for war and revolution, with echoes that persist to this day.”—Jay Carter, author of Champions Day

“[A] gripping debut history… Zimmerman weaves in snapshots of a country in turmoil, contrasting walled cities and starving villagers caught in the cross fire between bandits and warlords with thriving metropolises built by foreign interests. Dramatic and meticulously researched, it’s an immersive look at a forgotten chapter of Chinese history.”—Publishers Weekly

“Vividly characterized… Tremendous insight into little-remembered yet crucial events at the beginning of the formation of modern China.” —Kirkus Reviews