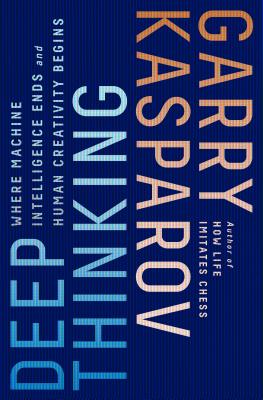 Garry Kasparov's 1997 chess match against the IBM supercomputer Deep Blue was a watershed moment in the history of technology. It was the dawn of a new era in artificial intelligence: a machine capable of beating the reigning human champion at this most cerebral game.

That moment was more than a century in the making, and in this breakthrough book, Kasparov reveals his astonishing side of the story for the first time. He describes how it felt to strategize against an implacable, untiring opponent with the whole world watching, and recounts the history of machine intelligence through the microcosm of chess, considered by generations of scientific pioneers to be a key to unlocking the secrets of human and machine cognition. Kasparov uses his unrivaled experience to look into the future of intelligent machines and sees it bright with possibility. As many critics decry artificial intelligence as a menace, particularly to human jobs, Kasparov shows how humanity can rise to new heights with the help of our most extraordinary creations, rather than fear them. Deep Thinking is a tightly argued case for technological progress, from the man who stood at its precipice with his own career at stake.

Garry Kasparov is a business speaker, global human rights activist, author, and former world chess champion. His keynote lectures and seminars on strategic thinking, achieving peak performance, and tech innovation have been acclaimed in dozens of countries. A frequent contributor to the Wall Street Journal, he is the author of two books, How Life Imitates Chess and Winter is Coming, each of which has been translated into more than a dozen languages. He is a Senior Visiting Fellow at the Oxford Martin School, working in cooperation with the Future of Humanity Institute. He lives in New York.

Mig Greengard is Spokesman and Senior Advisor to Garry Kasparov.

"The great Garry Kasparov takes on the key economic issue of our time: how we can thrive as humans in a world of thinking machines. This important and optimistic book explains what we as humans are uniquely qualified to do. Instead or wringing our hands about robots, we should all read this book and embrace the future."—p.p1 {margin: 0.0px 0.0px 0.0px 0.0px; font: 11.0px Calibri}span.s1 {font-kerning: none}Walter Isaacson, bestselling author of The Innovators

"Garry Kasparov's perspectives on artificial intelligence are borne of personal experience - and despite that, are optimistic, wise and compelling. It's one thing for the giants of Silicon Valley to tell us our future is bright; it is another thing to hear it from the man who squared off with the world's most powerful computer, with the whole world watching, and his very identity at stake."—p.p1 {margin: 0.0px 0.0px 0.0px 0.0px; font: 11.0px Calibri}span.s1 {font-kerning: none}Charles Duhigg, bestselling author of Smarter Faster Better

"From the man at the epi-center of one the ten defining moments of the 20th century, a fascinating and insightful overview of how computers came to surpass humans at chess, and what it means for mankind. Deeply research and clearly exposited, it is also a revealing portrait of what it is like to a real-life John Henry pitted against the steam hammer."—Ken Rogoff, bestselling author of This Time is Different

"Intelligent, absorbing...Thoughtful reading for anyone interested in human and machine cognition and a must for chess fans."—Kirkus Reviews, starred review

"As Kasparov recounts in arresting detail what it felt like to compete cognitively with a machine, he extrapolates his experience into an optimistic perspective on how computerized intelligence can enhance rather than overwhelm human brainpower, and instead of only eliminating jobs and opportunities, can actually generate them."
—Booklist

"Kasparov includes enough detail to satisfy chess enthusiasts, while providing a thrilling narrative for the casual reader. Deep Thinking delivers a rare balance of analysis and narrative, weaving commentary about technological progress with an inside look at one of the most important chess matches ever played."—Demis Hassabis, Nature

"The raw emotion of [the loss to Deep Blue] bursts out of the pages of Kasparov's gripping story, which he fully recounts for the first time in Deep Thinking... What is striking, and reassuring, is that far from raging against the machine, Kasparov marvels at the capabilities of computers and is excited by the possibilities for future collaboration...reads at times like a fast-paced psychological thriller."—John Thornhill, Financial Times

"Deep Thinking is like Kasparov himself: fascinating, razor-sharp, and provocative. In it he finally tells us, twenty years later, what he's learned from participating in the most famous human vs. machine competition since John Henry. The answer is a huge amount, which is also what you'll learn from reading Deep Thinking."—Andrew McAfee, principal research scientist at MIT and coauthor of The Second Machine Age

"Garry Kasparov has been a true pioneer in both the theory and practice of human-machine intelligence. Deep Thinking encompasses his wisdom in these areas in a highly entertaining and informative manner. I couldn't put it down, and don't think you will be able to either."—Tyler Cowen, author of The Great Stagnation

"Few people have a more interesting or illuminating perspective than Garry Kasparov. Deep Thinking is a provocative and fascinating read that will challenge the conventional wisdom about our future."—Bill McDermott, CEO of SAP