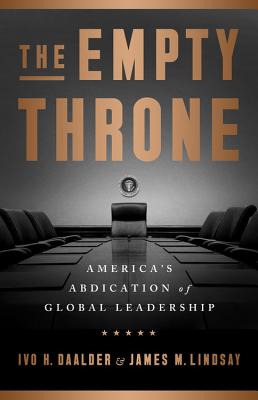 American diplomacy is in shambles, but beneath the daily chaos is an erosion of the postwar order that is even more dangerous.

America emerged from the catastrophe of World War II convinced that global engagement and leadership were essential to prevent another global conflict and further economic devastation. That choice was not inevitable, but its success proved monumental. It brought decades of great power peace, underpinned the rise in global prosperity, and defined what it meant to be an American in the eyes of the rest of the world for generations. It was an historic achievement.

Now, America has abdicated this vital leadership role. The Empty Throne is an inside portrait of the greatest lurch in US foreign policy since the decision to retreat back into Fortress America after World War I. The whipsawing of US policy has upended all that America's postwar leadership created-strong security alliances, free and open markets, an unquestioned commitment to democracy and human rights. Impulsive, theatrical, ill-informed, backward-looking, bullying, and reckless are the qualities that the American president brings to the table, when he shows up at all. The world has had to absorb the spectacle of an America unmaking the world it made, and the consequences will be with us for years to come.

Ivo H. Daalder is the president of the Chicago Council on Global Affairs. Prior to joining the Council, Daalder served as the ambassador to the North Atlantic Treaty Organization under President Obama. He has previously worked with James Lindsay on America Unbound: The Bush Revolution in Foreign Policy, selected as a top book of 2003 by the Economist. Daalder is a frequent contributor to the opinion pages of the world's leading newspapers, and a regular commentator on international affairs on television and radio.

James M. Lindsay is senior vice president, director of studies, and Maurice R. Greenberg chair at the Council on Foreign Relations. Dr. Lindsay has written widely on various aspects of American foreign policy and international relations. He has contributed articles to the op-ed pages of many major newspapers, including the New York Times, Washington Post, and Los Angeles Times. In addition to America Unbound: The Bush Revolution in Foreign Policy, his previous book with Ivo Daalder, other books include Agenda for the Nation (with Henry J. Aaron and Pietro S. Nivola), and Congress and the Politics of U.S. Foreign Policy.

"A lively and authoritative account of the Trump administration's turbulent encounter with the outside world since the president took office in early 2017."—Gideon Rachman, Financial Times