Perfect Strangers: A Story of Love, Strength, and Recovery After the 2013 Boston Marathon (Paperback) 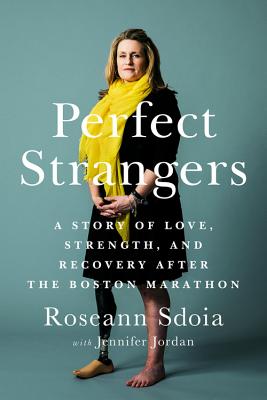 As Roseann Sdoia waited to watch her friend cross the finish line of the Boston Marathon in 2013, she had no idea her life was about to change-that in a matter of minutes she would look up from the sidewalk, burned and deaf, staring at her detached foot, screaming for help amid the smoke and blood.

In the chaos of the minutes that followed, three people would enter Roseann's life and change it forever. The first was Shores Salter, a college student who, when the bomb went off, instinctively ran into the smoke while his friends ran away. He found Roseann lying on the sidewalk and, using a belt as a tourniquet, literally saved her life that day. Then, Boston police officer Shana Cottone arrived on the scene and began screaming desperately at passing ambulances, all full, before finally commandeering an empty paddy wagon. Just then a giant appeared, in the form of Boston firefighter Mike Materia, who carefully lifted her into the fetid paddy wagon. He climbed in and held her burned hand all the way to the hospital. Since that day, he hasn't left her side, and today they are planning their life together.

Perfect Strangers is about recovery, about choosing joy and human connection over anger and resentment, and most of all, it's about an unlikely but enduring friendship that grew out of the tragedy of Boston's worst day.

Roseann Sdoia is a public speaker and advocate for challenged athletes. She was born in Winchester, Massachusetts, a suburb north of Boston. After graduating from the University of Massachusetts/Lowell, she moved to Los Angeles where she began her career in real estate management. After two years working in LA and then Florida, she realized that all of her vacations were spent traveling home to New England, so she returned to Boston.

Dedicated to both her professional and personal lives, Roseann's circle of friends and family is legendary -- even her trauma surgeon at Massachusetts General Hospital gave up on his "one guest for only fifteen minutes per hour" rule when he saw her line of visitors stretched down the hospital corridor. She is committed to one day running the entire 26.2 mile Boston Marathon. In November of 2014, she completed her first 5K race since the bombing so she is on her way. Perfect Strangers is her first book.