Let Trump Be Trump: The Inside Story of His Rise to the Presidency (Paperback) 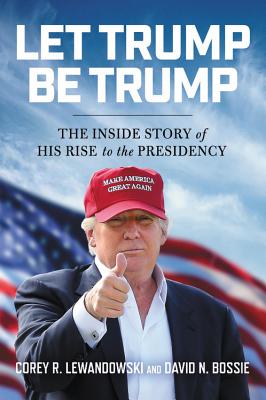 Let Trump be Trump: The Inside Story of His Presidency is the ultimate behind-the-scenes account of how he became President of the United States.

Donald Trump was a candidate, and now a president, like none that have come before. His startling rise to the White House is the greatest political tale in the history of our republic. Much has been written about this once-in-a-millennial event but all of those words come from authors outside the orbit of Donald Trump.

Now, for the first time, comes the inside story.

Written by the guys in the room-two of Trump's closest campaign advisors-Let Trump Be Trump is the eyewitness account of the stories behind the headlines. From the Access Hollywood recording and the Clinton accusers, to Paul Manafort, to the last-moment comeback and a victory that reads like something out of the best suspense novel, Let Trump Be Trump pulls back the curtain on a drama that has mesmerized the whole world-including the palace intrigues of the Mooch, Spicer, Preibus, Bannon, and more.

By turns hilarious and intimate, Let Trump Be Trump also offers a view of Donald Trump like you've never seen him, the man whose success in business was built not only on great skill but on loyal relationships and who developed the strongest of bonds with the band of outsiders and idealists who became his team because they believed in him and his message.

Written by Trump's campaign manager, the fiery Corey Lewandowski, and Dave Bossie, the consummate political pro and the plaintiff in the famous Citizens United Supreme Court case who helped steer the last critical months of the Trump campaign, Let Trump Be Trump is destined to be the seminal book about the Trump campaign and presidency.

Corey R. Lewandowski is a senior advisor to President Trump's 2020 campaign. He is also president and CEO of Lewandowski Strategic Advisors, LLC. He previously served as the chief political advisor and campaign manager to Donald J. Trump for President. Prior to that, he was an executive for Americans for Prosperity. Lewandowski appears regularly on television and serves as an on-the-record spokesman to major print outlets. He is a contributor to the Hill newspaper and was recently named a visiting fellow at Harvard University. Corey previously served as a certified police officer with the state of New Hampshire, where he lives with his family.

David N. Bossie is the national committeeman for the GOP in Maryland. He has served as president of Citizens United since 2001 and is a Fox News contributor. Beginning in August 2016, Bossie served as deputy campaign manager for Donald J. Trump for President and then as deputy executive director of the Presidential Transition Team. In 2015, Bossie was ranked number two in Politico's top fifty most influential people in American politics. In 2016, he was elected Republican national committeeman from Maryland. David, proudly served as a volunteer firefighter for over fifteen years in Maryland where he lives with his wife, Susan and their four children, Isabella, Griffin, Lily and Maggie.

"Bossie and Lewandowski pull back the curtain on the 2016 campaign-a wild, fun, and historic ride."—Laura Ingraham

"These guys were in the room for the wildest presidential campaign in recent history. The stories are all here. Very entertaining and informative."—Mark Levin

"Hillary, do you want to know what really happened? Read this book! Corey Lewandowski and Dave Bossie take you deep inside the phenomenal Trump campaign. Let Trump Be Trump is written with true insight and understanding of America's greatest presidential candidate, and once you begin this story, I promise you will not put it down until you finish."—Sean Hannity

"Key leaders of the growing conservative movement, Corey Lewandowski and Dave Bossie helped make Trump president and tell Trump's winning story like no one else has-from the inside."—Newt Gingrich, Former Speaker of the House

"... paints a portrait of Mr. Trump that shows him as he is." —The New York Times

"... chutzpah on an epic scale" —The Economist

"It's as close as we're likely to get to a "What Happened" from the winning side...written by the people who were in the room at the time and not filtered through leaks and second-hand anecdotes. That sets it apart from other books on 2016." —Townhall

"...a political book can't get much better than this."—American Spectator

"...the first book to have been published by Trump campaign insiders...gossipy tidbits, of which there are many." —New Republic

"...revealing passages of what it's like to work for Mr. Trump."
—CBS News

"Far from being dismayed by Trump's rough edges, Lewandowski and Bossie celebrate them."—Times of London