Trump: America First: The President Succeeds Against All Odds (Hardcover) 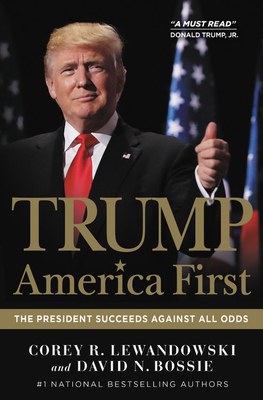 New York Times bestselling authors and close advisors to the president Corey R. Lewandowski and David N. Bossie write from the front lines of Trump's battle to keep America great.
Trump: America First gives the reader a firsthand and inside account of the Trump administration's battle for the soul of America.
As we face the most critical presidential election of our lifetimes, we find ourselves buried in an avalanche of political spin, candidate talking points, and slick campaign ads.
Then, just as you're ready to give up, along comes a book that makes sense of a political time like none that have come before.Written with the urgency of a countdown and by President Trump's two top outside political advisors and friends, Corey R. Lewandowski and David N. Bossie, Trump: America First blasts through the nonsense to deliver a first-hand account of the Trump presidency and reelection campaign during its most tumultuous time. From the COVID-19 shutdown in March to the campaign leadership shakeup and reset in July, Lewandowski and Bossie are present for every big moment, and now the reader is too.
With unprecedented access to President Trump, the authors take us inside the Oval Office, aboard Air Force One, and backstage at Trump rallies. As they did in their first two blockbuster New York Times bestsellers, Lewandowski and Bossie show a side of the president few get to see.
Along the way, Lewandowski and Bossie also tell of their own battles with the forces aligned against the president, and bring us inside the White House to the rough-and-tumble world of Trump's West Wing.Trump: America First also makes a case for electing Donald Trump to a second term. From revamping our trade with China to replacing NAFTA, from NATO to Kim Jong Un, Donald Trump leaves Joe Biden in the dust.
Written with the authors' usual wit and political insight, America First is truly a book a political book for our time.

Corey R. Lewandowski serves as a senior advisor to Trump-Pence 2020. He is also president and CEO of Lewandowski Strategic Advisors, LLC. He previously served as campaign manager and chief political strategist to Donald J. Trump for President. Corey serves as a presidential appointee to the Commission on Presidential Scholars. He appears regularly on television and serves as an on-the-record spokesman to major print outlets. He is a contributor to The Hill newspaper and was a visiting fellow at Harvard University. Lewandowski previously served as a certified police officer with the State of New Hampshire, where he lives with his family.
David N. Bossie has served as president of Citizens United since 2001. He is currently Senior Advisor to Trump-Pence 2020, and a presidential appointee to the Commission on Presidential Scholars. In 2016, Bossie served as deputy campaign manager for Donald J. Trump for President and then deputy executive director of the Presidential Transition Team. In 2015, Bossie was ranked number two in Politico's top 50 most influential people in American politics. In 2016, he was elected Republican National Committeeman from Maryland. David proudly served as a volunteer firefighter for over 15 years in Maryland where he lives with his wife and their four children.

"... paints a portrait of Mr. Trump that shows him as he is."—New York Times

"... chutzpah on an epic scale"—The Economist