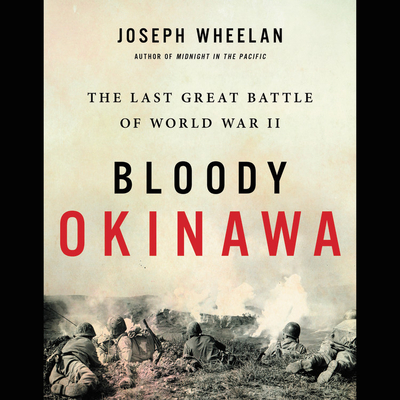 By Joseph Wheelan, George Newbern (Read by)
$38.08
Not Available

A stirring narrative of World War II's final major battle--the Pacific war's largest, bloodiest, most savagely fought campaign--the last of its kind. On Easter Sunday, April 1, 1945, more than 184,000 US troops began landing on the only Japanese home soil invaded during the Pacific war. Just 350 miles from mainland Japan, Okinawa was to serve as a forward base for Japan's invasion in the fall of 1945. Nearly 140,000 Japanese and auxiliary soldiers fought with suicidal tenacity from hollowed-out, fortified hills and ridges. Under constant fire and in the rain and mud, the Americans battered the defenders with artillery, aerial bombing, naval gunfire, and every infantry tool. Waves of Japanese kamikaze and conventional warplanes sank 36 warships, damaged 368 others, and killed nearly 5,000 US seamen. When the slugfest ended after 82 days, more than 125,000 enemy soldiers lay dead--along with 7,500 US ground troops. Tragically, more than 100,000 Okinawa civilians perished while trapped between the armies. The brutal campaign persuaded US leaders to drop the atomic bomb instead of invading Japan. Utilizing accounts by US combatants and Japanese sources, author Joseph Wheelan endows this riveting story of the war's last great battle with a compelling human dimension.