Murdered by Capitalism: A Memoir of 150 Years of Life and Death on the American Left (Nation Books) (Paperback) 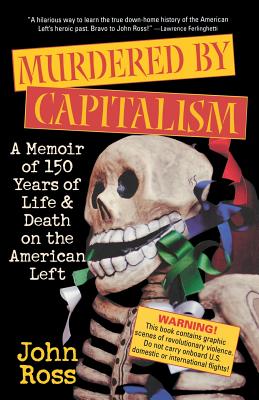 After spilling bourbon on Schnaubelt's grave, its pugnacious and very dead occupant becomes Ross's mentor, sidekick, and boozing companion through this epic telling of the hallucinatory, carnal, and ornery histories of the American Left and John Ross's own remarkable life. Schnaubelt navigates us through his seemingly boundless revolutionary battleground, uttering cries of subversion from within the grave while trying to remain out of earshot from the FBI snoop and local supermarket tycoon buried nearby. Ross's own story -- hobo revolutionist, junkie, poet, and journalist is a contrapuntal to Schnaubelt's. Ross never takes himself too seriously, yet his most remarkable trait is the honesty with which he approaches life, even while trying to deconstruct his own faults, personal tragedies (including the death of his one-month-old son), and imperfections. His pursuit of revolutionary politics and poetics is the constant, often spent with his muse, Revolutionary Mexico. Ross concludes with a trip to Baghdad as a "human shield," before the Anglo-American invasion, ready to sacrifice his life as part of his perpetual struggle for justice. Award-winning writer John Ross's memoir is inspired from a tumbledown tombstone in California: The headstone reads: E. B. Schnaubelt 1855 -- 1913, "Murdered by Capitalism."

John Ross is a poet, freelance journalist, and activist currently residing in Mexico City. His articles have appeared in the San Francisco Bay Guardian, the Nation, CounterPunch, Texas Observer, the Progressive, and La Jornada. His book Rebellion from the Roots won the American Book Award and his somewhat autobiographical memoir Murdered by Capitalism won the Upton Sinclair Award and was a San Francisco Chronicle Book of the Year.