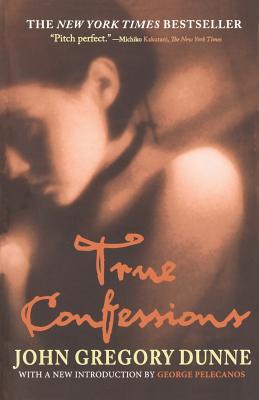 In 1940s Los Angeles, an unidentified murder victim is found bisected in a shadowy lot. A catchy nickname is given her in jest—"The Virgin Tramp"—and suddenly a "nice little homicide that would have drifted off the front pages in a couple of days" becomes a storm center. Two brothers, Tom and Des Spellacy, are at the heart of this powerful novel of Irish-Catholic life in Southern California just after World War II. Played in the film version by Robert Duvall and Robert De Niro respectively, Tom is a homicide detective and Des is a priest on the rise within the Church. The murder investigation provides the background against which are played the ever changing loyalties of the two brothers. Theirs is a world of favors and fixes, power and promises, inhabited by priests and pimps, cops and contractors, boxers and jockeys and lesbian fight promoters and lawyers who know how to put the fix in. A fast-paced and often hilarious classic of contemporary fiction, True Confessions is about a crime that has no solutions, only victims. More important, it is about the complex relationship between Tom and Des Spellacy, each tainted with the guilt and hostility that separate brothers.

John Gregory Dunne was the author of six novels -- Vegas; True Confessions; Dutch Shea, Jr.; The Red White and Blue; Playland; and Nothing Lost -- and seven works of nonfiction, among which are the memoir-like Harp and two books that look at Hollywood, The Studio and Monster. Born in West Hartford, Connecticut, in 1932, he graduated from Princeton in 1954. He collaborated with his wife, the writer Joan Didion, on many screenplays, including Panic in Needle Park and True Confessions. John Gregory Dunne died in December 2003.