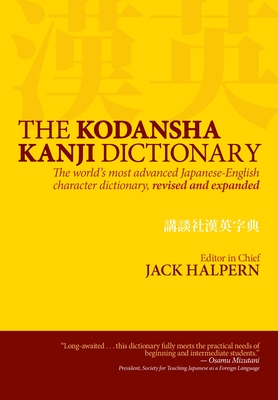 The Kodansha Kanji Dictionary—a revised, expanded edition of Jack Halpern’s groundbreaking New Japanese-English Character Dictionary—is the most complete, linguistically accurate, and up-to-date dictionary of its kind. The culmination of more than twenty years of labor—some one hundred man-years—this authoritative and easy-to-use dictionary has been celebrated the world over by students and teachers of the Japanese language for its wealth of detailed information on the meanings and usages of Sino-Japanese characters.

One of the unique features that has made this dictionary so popular is the core meaning, a concise keyword that facilitates an instant grasp of the fundamental concept of each kanji. Along with detailed character meanings, the core meaning helps learners decode unfamiliar compound words from the meanings of their components.

Another unique feature is the System of Kanji Indexing by Patterns (SKIP), a revolutionary indexing system that makes it possible to locate entries as quickly and as accurately as in alphabetical dictionaries. With SKIP, all you need to do to find a kanji is identify the geometrical pattern to which it belongs, then count the strokes in each part of that pattern—a much speedier process than searching by traditional methods such as by radical.

Updates include the integration of 5,458 entry characters—almost 20 percent more than in the first edition. This includes all the government-prescribed Joyo and Jinmei Kanji, as well as extensive coverage of old and alternative character forms. The new edition also features more readings, meanings, synonym articles, usage notes, and vocabulary items than before. And, in keeping with modern Japanese-language curricula, character and compound readings are shown in kana instead of romanized Japanese.

With its wealth of detailed and up-to-date information on kanji meanings, readings, and usages, its accessible new design, its convenient lookup methods (six including SKIP), and its added content, this dictionary is certain to satisfy the needs of students, teachers, scholars, translators—anyone who uses the Japanese language.

Jack Halpern is the CEO of The CJK Dictionary Institute (CJKI) in Japan. The institute is one of the world’s prime sources for CJK (Chinese, Japanese, and Korean) dictionaries, and specializes in compiling comprehensive CJK and Arabic lexical databases. A lexicographer by profession, Halpern spent more than twenty years compiling this dictionary and its predecessor, the New Japanese-English Character Dictionary.

"Unrivaled in terms of both quantity and quality . . . this dictionary will satisfy the needs of kanji learners the world over." —Shigeko Miyazaki, Chair of the Board, Association for Japanese-Language Teaching (AJALT)