The Book of Kimono (Paperback) 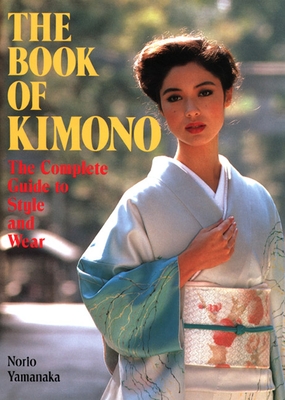 By Norio Yamanaka
$33.54
Not Available

This practical and attractive book makes available for the first time the basic knowledge and vocabulary needed to select and put on a kimono and obi.


Whether for women or men, all kimono are cut and sewn essentially from a single pattern, but a number of variations must be considered, depending on the occasion. Guidelines are given to making these choices, and the way to dress in a kimono, from the preliminaries to tieing the bustle sash, is described in detail and fully illustrated. For women, there are formal kimono, obi and accessories, and the lightweight summer yukata; for men, the yukata and the ceremonial ensemble of kimono, haori coat and hakama skirt. Children's kimono for festive events are also described.


Kimono fashions have evolved over the centuries in response to varied influences. Today modern innovations are making the wearing of kimono at home and elsewhere an attractive alternative to Western garments. These are included here, along with a discussion of aesthetics, the history of the kimono, and the meaning that kimono culture can have for wearers and admirers throughout the world.

NORIO YAMANAKA was born in Shiga Prefecture in 1928. In 1964 he founded the Sodo Kimono Academy, the first institute of its kind to encourage the wearing of Japan's national dress in everyday life. His philosophy is that wearing the kimono properly depends as much on the person's inner nature as on the garment itself. His movement has spread throughout Japan, and more than five million people have been taught how to wear the kimono by the fifty thousand consultants the academy has graduated.
Mr. Yamanaka was appointed chairman of the AllJapan Kimono Consultants Association when it was formed in 1969. He is the author of several books on the kimono in Japanese, and since 1970 he has annually led delegations of more than a hundred members each, traveling to forty-five countries in Asia, Europe and North and South America to familiarize other people with this form of dress. In 1980 and 1982 he was invited to the United Nations headquarters in New York, where he lectured and gave demonstrations on the theme of the kimono and Japanese culture.