Sword Techniques of Musashi and the Other Samurai Masters (Hardcover) 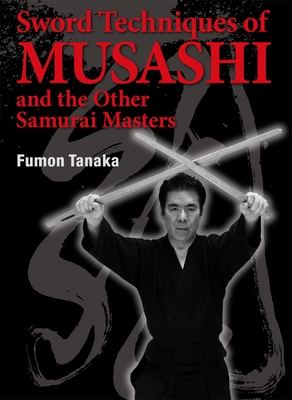 In his eye-opening new book, author Fumon Tanaka uses the life and accomplishments of sword master Miyamoto Musashi to look at the history of swords and sword fighting, and to discuss their role in Japanese history and in the development of traditional Japanese martial arts systems.


The book opens with an introduction to Musashi as a real-life figure, not just the legend we’ve come to know. Musashi was born in 1584, a time of transition in Japan that saw centuries of violence and war give way to an era of peace. In his early years, Musashi studied kenjutsu (the technique of the sword) and trained as a warrior. Before he turned thirty, he had fought and won sixty-six duels, proving himself a truly gifted swordsman. When he was in his thirties, however, warriors were no longer called upon to do battle, and many, like Musashi, turned to the inner secrets and theories of kenjutsu as a way to find a deeper meaning to life. He became a first-class painter and wrote Zen poetry. By 1629, he had gone back to his ronin (masterless warrior) ways, and opened a kenjutsu dojo, where he taught two-sword fighting, the technique he perfected although didn’t invent, as is widely believed. In 1643, when he was sixty years old, Musashi wrote his classic work, The Book of Five Rings.


In the second chapter of the book, Tanaka introduces Musashi’s major rivals, while the last two chapters go into great detail about the various traditional martial arts systems including the development and characteristics of each, as well as the techniques themselves.


The long history of Japan is also the history of the martial arts, which evolved from swordsmanship. And since the mental, spiritual, and physical aspects are inseparable, an exploration of traditional martial arts is also a look at the very essence of Japanese culture.

Fumon Tanaka was born in 1943. He started learning kendo (the modern version of sword fighting) at the age of thirteen, and has been practicing martial arts ever since. He is the leading authority on the traditional martial arts in Japan, and has written many books on the subject, including Samurai Fighting Arts published by Kodansha International in 2003. In 1998 he traveled to France as part of the Nihon Bud? delegation selected by the Ministry of Education and the Agency for Cultural Affairs. Since then, he has frequently been invited to teach in Germany, Italy, England, France, Denmark, and Sweden.