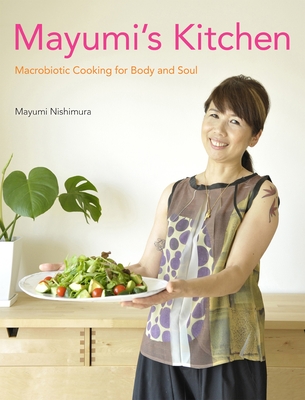 By Mayumi Nishimura, Madonna (Contributions by)
$33.54

In Mayumi's Kitchen, Mayumi Nishimura, a leading figure in the macrobiotics world and Madonna's private macrobiotic chef, shares her recipes for delicious food that nourishes the body and the soul. Macrobiotics is a healthy, nature-friendly way of life based on a diet of whole grains, vegetables, and beans. People all over the world, including many Hollywood stars, have embraced a macrobiotic diet because of its health benefits including higher energy, beautiful skin, a tranquil mind, and a greater sense of connection with the universe. Mayumi's unique style of cooking is healthful, intuitive, and easy to stick with. She draws her inspiration not only from Japanese food, which she grew up eating, but also from Chinese, French, Italian, and other cuisines, as well as from macrobiotic traditions. Above all, though, she believes that enjoyment is the key to sustaining healthy eating habits, and she offers more than 130 recipes for a wide variety of dishes including soups, pastas, brown rice, grain, and bean dishes, even party foods and desserts. The centerpiece of Mayumi's Kitchen is her ten-day detox diet, followed by meal-planning tips and the recipes, all lavishly illustrated with color photos. Mayumi also explains unfamiliar techniques with step-by-step pictures and discusses nutritional value and energy quality. A perfect introduction for beginners, Mayumi's Kitchen will be welcomed by lifelong macrobiotic practitioners as well.

"Not only are you the best chef in the world...your amazing food helped me to be a happier, healthier person, balanced in body and mind." — Madonna (from the Preface)

"Mayumi makes beautiful, energizing food, which I have been lucky enough to enjoy many times over the years. I am thrilled that now everyone can have a chance to experience the effects of her meals, which are as healing and healthy as one can get!" — Gwyneth Paltrow

"When people think of macrobiotics, they think of healing and recovery, but they rarely think of gorgeous, yummy food. Mayumi's Kitchen changes all that."
— Christina Pirello, Emmy Award-winning host of Christina Cooks on national public television and best-selling cookbook author

"Mayumi has long been one of my favorite chefs in the world-her cooking is infused with love, joy, and the spirit of a true artist. So it's no surprise to me that this wonderful book is as inviting as her food-gorgeous, friendly, and welcoming."
— Jessica Porter, author, The Hip Chick's Guide to Macrobiotics

"In this book and its recipes, Mayumi captures the beauty and spirit of macrobiotics and natural foods cuisine. She has inspired many toward a healthful lifestyle, and will continue to do so with this wonderful book."
— Dr. Lawrence Haruo Kushi, nutritional epidemiologist

"With years of innovative experience, Mayumi Nishimura brings food to life with a balanced sense of taste, color, and good nutrition. The recipes and artistic photography in Mayumi's Kitchen are sure to make your mouth water and your lips quiver! This is whole food kitchen inspiration at its best."
— Verne Varona, author, Macrobiotics for Dummies

Mayumi Nishimura was born on the small island of Shinojima in Aichi Prefecture, Japan. In 1982 she moved to the U.S. and began studying macrobiotics under Michio Kushi—the leading authority in the field—at the Kushi Institute. Later she worked at the school as head cooking instructor. In 2001 Mayumi became Madonna's private macrobiotic chef, joining her on her Drowned World Tour. Between 2001 and 2008, she cooked for the superstar full-time. Currently Mayumi travels between Japan, where she writes and lectures on macrobiotics, and the U.S. She has published four books in Japanese. Mayumi's Kitchen, newly written, is her first book in English.

"The concept of following a macrobiotic diet might sound daunting, but Nishimura—who worked as Madonna's private chef for seven years (and had her former boss write a foreword for this book)—breaks it down into simple, can-do steps and recipes." --Publishers Weekly

"Want to eat like Madonna? Pick up a copy of ‘Mayumi’s Kitchen.’" --The Boston Herald

"…the book brims with easy, Japanese-style recipes that follow the principles of macrobiotics, a way of eating intended to boost energy, clear the skin and mind, and foster a deep connection with the Earth." --VIV Magazine