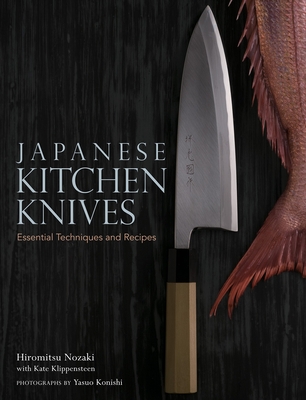 Sales of Japanese kitchen knives are booming in the U.S. But how many people have the skills to use these superbly-crafted tools to full advantage? Now, internationally renowned chef Hiromitsu Nozaki shares his expertise and insights in a book that will help anyone who owns a Japanese knife to maximize its performance.

In Japanese Kitchen Knives, Nozaki teaches the reader how to use usuba, deba and yanagiba, the three main traditional Japanese knives. He explains many essential techniques, such as the importance of understanding blade angle and point of force, and illustrates these lessons by working with ingredients familiar to western readers, like carrots and rainbow trout. Color photos and Nozaki’s commentary further clarify the process, and the pictures are taken from the chef’s perspective for easier understanding (most other books take photos from the reverse perspective). Each technique is accompanied by recipes that require its use, and all recipes are very simple, using easy-to-acquire ingredients. Other sections include a look at artisanal Japanese knife — making and information on sharpening, storing and identifying the variety of Japanese knives. Specialty knives are shown on location, from the unique unagi eel knife in an unagi specialty restaurant to the colossal tuna filleting knife in Tsukiji fish market.

HIROMITSU NOZAKI was classically trained in several Japanese restaurants before becoming the executive chef of Tokuyama in 1980, and Waketokuyama, in Tokyo in 1989. Known for his culinary skills and deep knowledge of food, he catered for the Japanese athletes of the 2004 Olympics in Athens. He has published over forty cookbooks, ranging from simple home cooking and baby food recipes to textbooks for apprentices, traditional Japanese recipes, and scientific new approaches to Japanese cuisine. Waketokuyama was awarded one star in the Michelin guide Tokyo 2008.

KATE KLIPPENSTEEN writes on food, film, and travel as well as comparative culture for Japanese and US publications. She is the author of Cool Tools: Cooking Utensils from the Japanese Kitchen, published in 2006 by Kodansha International. Klippensteen has lived in Tokyo since 1986.

YASUO KONISHI has journeyed to more than one hundred countries over his career for a wide number of publications, including Esquire Japan. His work has appeared in a number of food-related books published in Japan, including Cool Tools.


"…a love story to sharpened steel." —The Denver Post


"Chef Nozaki describes in detail what each knife is used for, how to use it properly and then provides recipes as examples. The recipes are very easy for home cooks and use ingredients found in most supermarkets. And the photographs are incredible." —TheReluctantGourmet.com