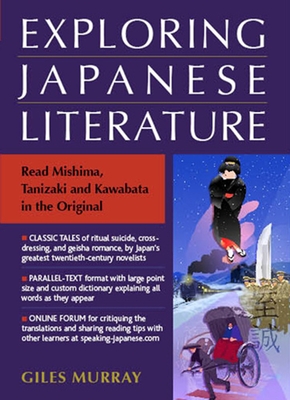 Yasunari Kawabata, Yukio Mishima and Junichiro Tanizaki are all giants of world literature. It stands to reason that students of Japanese would long to read them in their original language. Exploring Japanese Literature enables them to do just that. Featuring one each of these writers’ most characteristic stories—plus linguistic support in the form of a built-in dictionary—the book picks up where the author’s previous bestselling text, Breaking into Japanese Literature, left off.

The poignancy of romance between a wealthy Tokyoite and a provincial geisha in Yasunari Kawabata’s "Snow Country"; the ecstatic frenzy of a couple committing ritual suicide in Mishima’s "Patriotism"; the amoral antics of a playboy aesthete trying to fire up his flagging zest for life in Tanizaki’s "The Secret" — Exploring Japanese Literature is a reader’s entrée into the uniquely rich and exotic world of modern Japanese fiction.

On each two-page spread, the original Japanese is printed in large type on the left-hand page, with the corresponding English translation on the right and the dictionary running along the bottoms of both. Everything the student needs to read the stories and understand them is right there.

To enrich students’ experience even further, Exploring Japanese Literature also features biographies of the three novelists, mini-prefaces that set the scene for the individual stories, and evocative illustrations. In addition, there is a dedicated website at www.speaking-japanese.com where learners have the chance to put forward their own interpretations of the Japanese and engage in debate with the author, the editor and, of course, other readers of the book.

GILES MURRAY is the author of innovative language-study books like 13 Secrets for Speaking Japanese and Breaking into Japanese Literature, and has translated several books, including So Sad to Fall in Battle, a biography of the Japanese commander on Iwo Jima in World War II, and the prizewinning In the Pool by Hideo Okuta.