The Otaku Encyclopedia: An Insider's Guide to the Subculture of Cool Japan (Paperback) 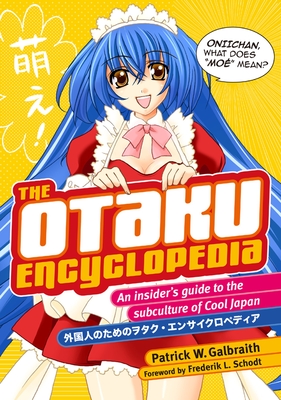 Otaku: Nerd; geek or fanboy. Originates from a polite second-person pronoun meaning "your home" in Japanese. Since the 1980s it’s been used to refer to people who are really into Japanese pop-culture, such as anime, manga, and videogames. A whole generation, previously marginalized with labels such as "geek" and "nerd," are now calling themselves "otaku" with pride.


The Otaku Encyclopedia offers fascinating insight into the subculture of Cool Japan. With over 600 entries, including common expressions, people, places, and moments of otaku history, this is the essential "A to Z" of facts every Japanese pop-culture fan needs to know. Author Patrick W. Galbraith has spent several years researching deep into the otaku heartland and his intimate knowledge of the subject gives the reader an insider’s guide to words such as moé, doujinshi, cospla y and maid cafés. In-depth interviews with such key players as Takashi Murakami, otaku expert Okada Toshio, and J-pop idol Shoko Nakagawa are interspersed with the entries, offering an even more penetrating look into the often misunderstood world of otaku. Dozens of lively, colorful images—from portraits of the interview subjects to manga illustrations, film stills and photos of places mentioned in the text—pop up throughout the book, making The Otaku Encyclopedia as entertaining to read as it is informative.

PATRICK W. GALBRAITH is a journalist based in Tokyo. He specializes in Japanese popular culture, and writes a regular column for Metropolis magazine. He gives weekly tours of Akihabara, the otaku capital of Japan, and is a Ph.D. candidate at the University of Tokyo.

"You can’t possibly be called an ‘otaku’ without this book." --Danny Choo, www.dannychoo.com


"Prepare for a wild, educational, and entertaining ride!"--from the foreword by Frederik L. Schodt, author of Manga! Manga!


"The author is clearly knowledgeable and the entries are rarely short blurbs, but are richly detailed and informative." --The Gaming Dungeon


"The Otaku Encyclopedia is obviously a treasure trove and necessary for anyone who is interested in anime and manga, but it also has much to offer anyone interested in Japanese history, society or linguistics." --Shelf Awareness

"This inexpensive, attractive and useful reference should have wide appeal for both otaku patrons and librarians working with manga and anime." --Library Journal