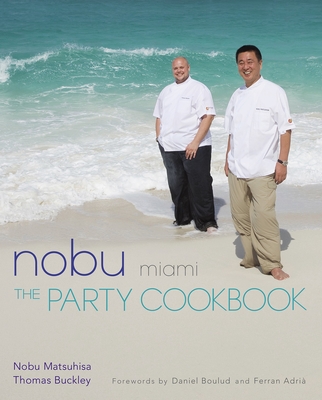 What would it be like to host an event catered by Nobu and Thomas Buckley, the executive chef of Nobu Miami? Now, food lovers and chefs everywhere can party like celebrities with Nobu Miami: The Party Cookbook, a visual treat and a celebration of the dazzlingly original fusion cuisine served in the Miami outpost of Nobu’s restaurant empire.

The book introduces an exotic line-up of finger foods and party dishes with South / American, and Japanese influences, at the same time that it conveys the sparkling, sun-kissed atmosphere of the restaurant’s Miami Beach location. The recipes are simple and take advantage of fresh, local seafood like Florida pompano and conch.

More than 70 party recipes, some created especially for the book, are featured. The recipes themselves are complemented by comments, anecdotes and sidebars by Nobu and Buckley, in which they explain what inspired them to create particular dishes. They also offer useful tips on cooking technique. The gorgeous, full-color photos are by James Beard Award-nominee Masashi Kuma.

Born in Japan, NOBU MATSUHISA was classically trained in a sushi restaurant in Tokyo before he headed to Peru. Subsequently, he ventured to Buenos Aires, Alaska and Los Angeles, where he opened his restaurant, Matsuhisa, in 1987. In 1994, he opened Nobu in New York City, in partnership with actor Robert De Niro. The Los Angeles Times named Chef Nobu one of "Southern California’s Rising Stars" in 1998; the James Beard Foundation inducted him into "Who’s Who of Food and Beverage in America" in 2002, and also nominated him for "Outstanding Chef" in 1997, 1999, 2000, 2001, 2002, 2003 and 2004. Nobu Matsuhisa has 22 restaurants in more than ten different cities around the world, including 12 in the United States.

THOMAS BUCKLEY worked with Daniel Boulud, Ferran Adria and Jean-Georges Vongerichten before joining Nobu Miami. He is an executive chef who not only interprets his master’s cuisine but also brings his own creativity into the kitchen with his knowledge of local ingredients.

Photographer MASASHI KUMA was nominated for a James Beard Award for his photography in Kodansha’s Kaiseki: The Exquisite Cuisine of Kyoto’s Kikunoi Restaurant.


"With winter fast approaching, it’s the perfect time to thumb through this tropical finger-food feast from the masters at Nobu Miami and take a vacation from the bitter cold." —American Way


"Matsuhisa and Buckley succeed in melding cuisines from diverse cultures in an eye-catching cookbook." —Library Journal


"…a sumptuously photographed coffee table-sized volume of recipes influenced by Miami, South America and the Caribbean…" —The Honolulu Advertiser