I Married Adventure: The Lives of Martin and Osa Johnson (Paperback) 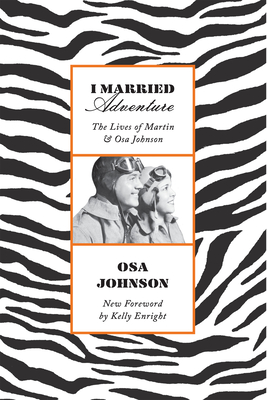 This classic, bestselling memoir tells of the often heart-stopping adventures of early 20th-century explorers and photographers Osa and Martin Johnson - now in a new edition featuring additional photos and personal letters from the Johnsons to friends and family.

Osa Johnson's memoir details her adventures alongside her husband Martin, an explorer and pioneering photographer. These two kids from Kansas sailed to Borneo, Kenya, and the Congo in the early part of the 20th century, where, with Martin holding the camera and Osa wielding the gun, they documented the indigenous people and wildlife they encountered in groundbreaking films such as "Among the Cannibals of the South Pacific" (1918) and "Simba" (1928). Osa's engaging and exciting text is complemented by scores of the dramatic black-and-white photos that made the couple famous. After Martin's death in 1937, Osa continued their work alone, I Married Adventure was first published in 1940 and became the bestselling nonfiction book of that year.

Osa Johnson was born in 1893 in Chanute Kansas. She married Martin Johnson in 1910 and accompanied him on all his expeditions until 1937, when he was killed in a commercial plane crash. After Martin's death, Osa continued his work alone, traveling, making films and writing. In 1940 she published I Married Adventure, which became a world-wide bestseller. The book was published under the Kodansha Globe imprint in 1997.

"books of adventure are so numerous….[But] this one is unique. It has the human quality of a novel and the permanence of social history." —Katherine Woods, The New York Times

"Tells the whole story unaffectedly and with a simple charm that is highly engaging. It belongs on any list of Americana, for the Johnsons were as American as Davy Crockett." —Joseph Wood Krutch, The Nation

"A pleasant, forthright…exciting book." —Clifton Fadiman, The New Yorker"It makes good reading…at this dark hour, as good an ‘escape story’ as you are apt to run into for some time." —Atlantic Monthly

"I MARRIED ADVENTURE is a fine book on many counts…A good travel book, a good adventure book, a good book about animals, a good book on photography, and , best of all…a good human story about two extremely likable people, told by one of them with simplicity, humor, [and] warmth." —Rose Feld, Books

"It isn’t just the animal-lover who will cherish this story. Anyone who likes a thrilling tale (a true one, too) with a plucky, nervy, cheerful, and charming hero and heroine is all set. I MARRIED ADVENTURE is as rare and real as the people who made it possible."—Olga Owens, Boston Transcript

"The reader is impressed with the tremendous industriousness of these two people, their physical endurance, their patience, their understanding of animals and natives, and their love for each other….[The] old and young will enjoy this book. It is splendidly illustrated." —M.N. Baker, Library Journal

"Every page of her book is readable and exciting: the photographs are plentiful and have all the dramatic quality that we are used to in the camera work of the author and her husband." —Manchester Guardian