Meltdown: How Greed and Corruption Shattered Our Financial System and How We Can Recover (Paperback) 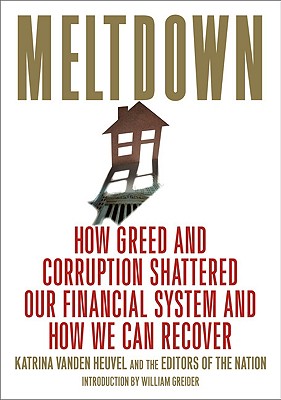 America's economy is in meltdown. Banks have failed, foreclosures are sweeping the housing market, and stocks have suffered their worst losses since the Great Depression. Faced with a complex and spiraling crisis, the government has poured billions of taxpayer cash into a bailout with no end in sight.
At every step of the way, The Nation, America's oldest weekly magazine, has tackled the most urgent questions facing the nation's leaders and its citizens with clarity and insight. Meltdown draws together nearly twenty years of the best of their coverage of the financial crisis and explores what steps President Obama and his new administration must take to ensure a more secure future for everyone.

Katrina vanden Heuvel is Editor and Publisher of the Nation. She is a frequent commentator on ABC, MSNBC, CNN, and PBS. She writes a weekly Web column for the Washington Post. Her blog, "Editor's Cut," appears at thenation.com.