The Rebel of Rangoon: A Tale of Defiance and Deliverance in Burma (Hardcover) 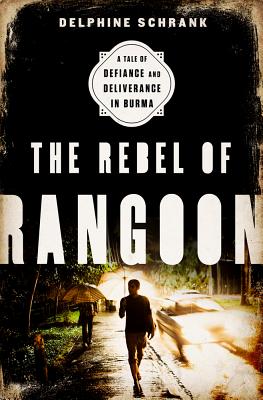 By Delphine Schrank
$30.23
Not Available

One of Kirkus Reviews Best Books of 2015

An epic, multigenerational story of courage and sacrifice set in a tropical dictatorship, The Rebel of Rangoon captures a gripping moment of possibility in Burma (Myanmar)

Once the shining promise of Southeast Asia, Burma in May 2009 ranks among the world's most repressive and impoverished nations. Its ruling military junta seems to be at the height of its powers. But despite decades of constant brutality-and with their leader, the Nobel Peace Prize-laureate Aung San Suu Kyi, languishing under house arrest-a shadowy fellowship of oddballs and misfits, young dreamers and wizened elders, bonded by the urge to say no to the system, refuses to relent. In the byways of Rangoon and through the pathways of Internet cafes, Nway, a maverick daredevil; Nigel, his ally and sometime rival; and Grandpa, the movement's senior strategist who has just emerged from nineteen years in prison, prepare to fight a battle fifty years in the making.

When Burma was still sealed to foreign journalists, Delphine Schrank spent four years underground reporting among dissidents as they struggled to free their country. From prison cells and safe houses, The Rebel of Rangoon follows the inner life of Nway and his comrades to describe that journey, revealing in the process how a movement of dissidents came into being, how it almost died, and how it pushed its government to crack apart and begin an irreversible process of political reform. The result is a profoundly human exploration of daring and defiance and the power and meaning of freedom.

Delphine Schrank is an award-winning reporter, a contributing editor to the Virginia Quarterly Review and a co-founder of DECA Stories, a pioneering writers' cooperative for deeply reported, global journalism. She was the Burma correspondent for the Washington Post , where she was an editor and staff writer.

"A dogged journalist penetrates the deeply secretive dissident underground in Burma's police state in this compelling look into a traumatized society in flux...Schrank displays an elegant style and determined journalist's diligence. A remarkable chronicle of a multigenerational struggle in Burma bringing about important change." --Kirkus, Starred Review

"This deeply researched book peels back a corner of the hidden world of Burmese dissidents who work for the cause championed by Aung San Suu Kyi, the leading figure in Burma's decades-long struggle for democracy. Schrank, the Washington Post's former Burma correspondent, delves deeply into the world of an activist she calls Nway, who ascends the ranks of Burma's dissident party, the National League for Democracy, as a young man.... Her admiration for the people involved in the worthy struggle remains clear throughout." --Publishers Weekly

"Delphine Schrank has written an extraordinary book. It is the chronicle of an individual, and through him a chronicle of the experience of Burmese resistance to oppression in our time. Schrank is a brave and dedicated journalist who has witnessed first hand the experience she narrates, and who has an uncanny ability to convey this experience via language both simple and powerful. At the same time, her book is laced with the kind of serious political analysis characteristic of the best political science. Finally, it is also a brilliant account of a more universal experience of insubordination-refusal of subordination-and empowerment that brings to mind Albert Camus's The Rebel. The Rebel of Rangoon is a terrific book that must be read to be believed. Read it." --Jeffrey C. Isaac, James H. Rudy Professor of Political Science Indiana University, Bloomington

"The Rebel of Rangoon is the remarkable odyssey of unseen heroes in the struggle to build democracy out of Burma's shadows and darkness. Delphine Schrank writes with passion and sensitivity about the quest for liberty in a time of tyranny. The story is inspiring yet agonizing; the characters unforgettable; the dream noble-and yet so painfully incomplete." --David E. Hoffman, Pulitzer Prize-winning author of The Dead Hand: The Untold Story of the Cold War Arms Race and Its Dangerous Legacy

"Remarkable...What Ms Schrank has written, however, is not a conventional journalist's lament about an appalling regime. It reads like a novel.... a massive and meticulous feat of reporting." --The Economist

"This story of passion and sacrifice in the country also known as Burma is a fine companion piece to the politicking now in full swing there, on the threshold of what many hope will be the freest election for more than half a century. Schrank's tale of the opposition underground during the decades of dictatorship is an insight into the forces shaping this Southeast Asian state - and, indeed, into others making the tough transition from authoritarian rule." --Financial Times

"Gripping...When so much attention devoted to Myanmar is concentrated at the geopolitical level, it is refreshing to have a book that zeroes in on the grassroots...Schrank captures the white-knuckle immediacy of life in the shadows...Her tale could be called cinematic if it wasn't so disturbingly real, and contemporary, in its portrayal of what happens if you get caught...Superb and timely." --The Guardian

"A very human look into the inhumanities of a regime that has made a habit of shooting student protesters and jailing human-rights advocates." --Wall Street Journal


"An intrepid exploration... In chronicling the political coming-of-age of Nway and his comrades against the backdrop of NLD party politics, The Rebel of Rangoon serves as a timely primer on the party's often-heroic struggles through the years to the current transitional period... Schrank makes a valuable contribution to the literature of pro-democratic resistance in Burma." --Washington Post

"An evocative reminder of how much has been achieved over five tumultuous years, and how far Myanmar has to go." --New York Review of Books

"Stunning.... A forensically detailed story of [NLD activists'] often subterranean struggle to avoid arrest, survive interrogation, keep their networks and cells active, and keep alive a dream for a more open and just society... In all its gritty detail, The Rebel of Rangoon is an inner-narrative of activist lives and the undulating challenges of underground organization; at a time when even the act of discussing politics and real events was deemed subversive by a paranoid military structure, and often punished with long prison terms." --The Irrawaddy

"Schrank's passionate and moving narrative is written in a poetic style that from the outset elicits genuine emotion. With verve and lyricism the author tells the little-known story of the political upheaval of Burma and the struggle of a group of resisters who fought fiercely for democracy in their small, often overlooked country. This is not only an emphatically poignant chronicling of history but a truly illuminating analysis of a human struggle. The politically aware will be engrossed by the depth of detail and personal challenges described in the book, while history enthusiasts will be gripped by the meticulous attention paid to the events that led to the political crisis. This enlightening work has the potential to impact the canon of contemporary political science. It is readable, enjoyable, and destined to become a staple for anyone wishing to learn more about Asian history or the world at large." --Library Journal, Starred Review

"Through the lives of Nway and his compatriots, Schrank conveys the long history of the fight for democracy in Burma and the enormous cost to individuals asking who to trust, who to lie to, and how to maintain sanity and relationships in a nation at odds with itself and its government. A very close-up look at a nation caught in its history and the current geopolitical tensions in Asia." --Booklist