Angels with Dirty Faces: How Argentinian Soccer Defined a Nation and Changed the Game Forever (Paperback) 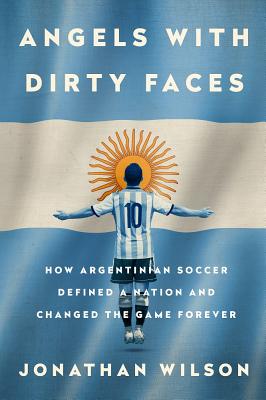 Lionel Messi, Diego Maradona, Alfredo Di St'fano: in every generation Argentina has uncovered a uniquely brilliant soccer talent. Perhaps it's because the country lives and breathes the game, its theories, and its myths. Argentina's rich, volatile history -- by turns sublime and ruthlessly pragmatic -- is mirrored in the style and swagger of its national and club sides. In Angels with Dirty Faces, Jonathan Wilson chronicles the operatic drama of Argentinian soccer: the appropriation of the British game, the golden age of la nuestra, the exuberant style of playing that developed as Juan Perón led the country into isolation; a hardening into the brutal methods of anti-fútbol; the fusing of beauty and efficacy under César Luis Menotti, and the emergence of all-time greats.

Praise for Inverting the Pyramid

"Here, for the first time in decades, is a top-notch soccer book on how soccer is actually played on the field." -- Simon Kuper

"An outstanding work. . . . The soccer book of the decade." -- Sunday Business Post

“Argentina's narrative is complicated, and Jonathan Wilson mines all of it ANGELS WITH DIRTY FACES. What sets Wilson's book apart is the depth to which he goes to show how soccer weaves through Argentina's political and economic turmoil. He finds that the country's most celebrated moments and players are never as great as they seem.” —Bloomberg Businessweek

“Mr. Wilson is the Lionel Messi of world football writing. Few writers in his genre are on the same literary pitch. His latest work is an integral read for those love the Argentinean style of play, its rich history and why football is the true soul of Argentina.” —World Football Commentaries

“[A] comprehensive, but immensely readable and wonderfully-researched history of a nation and its long-term love for the beautiful game… After reading this excellent history, you'll be as convinced as Argentina's football-loving population that it won't be long before the Carasucias add to their two World Cup titles.” —News North Wales