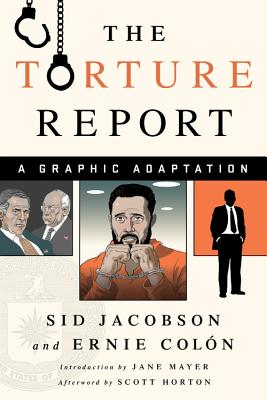 "The more who learn the truth the better off the country will be, because there is no better safeguard against the revival of torture than a well-informed public." -- Jane Mayer, from the Introduction

On December 9, 2014, the Senate Select Committee on Intelligence released a report that strongly condemned the CIA for its secret and brutal use of torture in the treatment of prisoners captured in the "war on terror" during the George W. Bush administration. This deeply researched and fully documented investigation caused monumental controversy, interest, and concern, and starkly highlighted both how ineffective the program was as well as the lengths to which the CIA had gone to conceal it.

In The Torture Report, Sid Jacobson and Ernie ColÃ³se their celebrated graphic-storytelling abilities to make the damning torture report accessible, finally allowing Americans to lift the veil and fully understand the crimes committed by the CIA.

Sid Jacobson and Ernie Colon first came together to create the New York Times bestselling The 9/11 Report: A Graphic Adaptation (Hill & Wang/FSG). Since then, the pair have collaborated on graphic books about Che Guevara, the war on terror, and Anne Frank. Jacobson was formerly the managing editor and editor in chief for Harvey Comics and an executive editor at Marvel Comics. Artist Colon has worked at Harvey, Marvel, and DC Comics.