Go Back to Where You Came From: The Backlash Against Immigration and the Fate of Western Democracy (Hardcover) 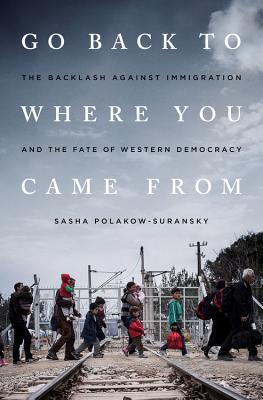 What if politicians pose a graver threat to liberal democracy than mass migration?

Brexit and Donald Trump's victory were just the beginning -- and Marine Le Pen's defeat does not signal a turning of the tide. From the Introduction

From Europe to the United States, opportunistic politicians have exploited the economic crisis, terrorist attacks, and an unprecedented influx of refugees to bring hateful and reactionary views from the margins of political discourse into the mainstream. They have won the votes of workers, women, gays, and Jews; turned openly xenophobic ideas into state policy; and pulled besieged centrist parties to the right. How did we get here?

In this deeply reported account, Sasha Polakow-Suransky provides a front-row seat to the anger, desperation, and dissent that are driving some voters into the arms of the far right and stirring others to resist. He introduces readers to refugees in the Calais "Jungle" and the angry working-class neighbors who want them out; a World War II refugee-turned-rabbi who became a leading defender of Muslim immigrants; the children of Holocaust survivors who have become apologists for the new right; and alt-right activists and the intellectuals who enable them.

Polakow-Suransky chronicles how the backlash against refugees and immigrants has reshaped our political landscape. Ultimately, he argues that the greatest threat comes not from outside, but from within -- even established democracies are at risk of betraying their core values and falling apart.

Sasha Polakow-Suransky is the author of The Unspoken Alliance: Israel's Secret Relationship with Apartheid South Africa and an Open Society Foundations fellow. He was an op-ed editor at the New York Times and a senior editor at Foreign Affairs and holds a doctorate in modern history from Oxford University, where he was a Rhodes Scholar. His writing has appeared in the Guardian, Foreign Policy, Newsweek, New Republic, and Boston Globe.

"Polakow-Suransky, a fellow
with the Open Society Foundations and a former opinion editor at the New York
Times, has reported from across the globe for this book, providing dispatches
from refu­gee camps and interviewing politicians, activists and immigrants on
all sides of this debate. He captures social and political transformations in
simple, memorable lines."—WashingtonPost

"[Sasha
Polakow-Suransky] has produced something badly needed in the English language
[...] this book's strength is its window into Europe's voices, past and present,
and the links the author finds between them."—Globe & Mail

"Polakow-Suransky is a steady and sober tour guide... the cumulative impact of his reporting is distressing. After reading his book, it's still possible to imagine a better future for the planet, but it's not nearly as easy... Go Back to Where You Came From is a cautionary tale focused on Europe, it also serves as a reminder of future challenges that we will face across the globe, as millions of climate refugees will be forced to move into new countries."—TheSan Francisco Chronicle

"A well-researched and authoritatively written analysis
that resists easy answers and generalizations regarding the complex problems of
immigration... Not an apologia for resistance to immigration but rather a
nuanced, important analysis of an issue fraught with complications."—Kirkus,Starred Review

"A sobering view on the effect and extent of
right-wing radicalism in liberal democracies for those interested in the recent
rise of right-wing populism."—Library Journal

"Sasha Polakow-Suransky confronts deep tensions between race, class, and borders that so many liberals would prefer to ignore, with detailed examples from Europe, the United States, and South Africa. For those of us deeply worried about the future of liberal democracy, Go Back to Where You Came From is an important and enlightening book."—Anne-Marie Slaughter, presidentand CEO, New America, former director of Policy Planning, US statedepartment 2009-2011

"Sasha Polakow-Suransky's superb new book unpacks the story, taking readers through a changing Europe bursting with promise yet racked by conflict. With its deep reportage, gripping prose, and powerful message, [Go Back to Where You Came From is] a must-read for anyone trying to understand global politics today-and tomorrow."—Gideon Rose, editor, Foreign Affairs

"The West has been taken over by a moral panic over
immigrants that threatens to found a new fascism. Sasha Polakow-Suransky's new
book is a fine antidote against this motivated menace."—Yanis Varoufakis, former finance minister of Greeceand author of And the Weak Suffer What They Must?

"An important, deeply reported investigation that
helps us understand the rise of the extreme right across the globe and a
warning of how it threatens Western democracies. A must-read for all concerned
citizens."—Paul Mason, author of Postcapitalism

"Go Back to Where You Came From offers a brilliant, bracing survey of the global immigration wars, from the working-class suburbs of Europe to the slums of South Africa to refugee camps in the South Pacific. Those who reject Sasha Polakow-Suransky's conclusions, as I do, must nevertheless reckon with this powerful book."—Reihan Salam, executive editor, National Review