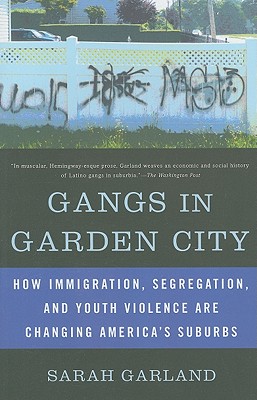 For the past five years, journalist Sarah Garland has followed the lives of current and former gang members living in Hempstead on the border of Garden City, Long Island. Affiliated with Mara Salvatrucha and 18th Street, their troubling personal stories expose the cruel realities of segregation, racial income gaps, and poverty that lie hidden behind suburban white picket fences.

As Garland travels from Los Angeles to El Salvador and back to the East Coast, she reveals a disturbing cycle of poverty in which families, fleeing from troubled Central American cities, move into America's suburban backyards, only to find the pattern of violence repeating itself. Brilliantly reported and sensitively told, Gangs in Garden City draws back the veil on a hidden, troubling world.

Sarah Garland has reported on crime and immigration for the New York Times, Marie Claire, New York Magazine, and the Village Voice. Originally from Kentucky, she lives in Brooklyn, New York.