The Death and Life of American Journalism: The Media Revolution That Will Begin the World Again (Paperback) 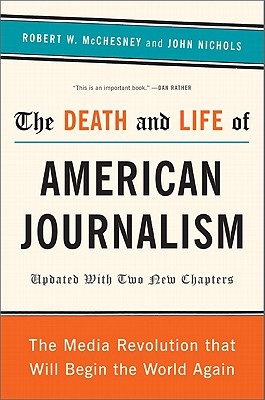 Daily newspapers are closing across America. Washington bureaus are shuttering; whole areas of the federal government are now operating with no press coverage. International bureaus are going, going, gone.

Journalism, the counterbalance to corporate and political power, the lifeblood of American democracy, is not just threatened. It is in meltdown.

In The Death and Life of American Journalism, Robert W. McChesney, an academic, and John Nichols, a journalist, who together founded the nation's leading media reform network, Free Press, investigate the crisis. They propose a bold strategy for saving journalism and saving democracy, one that looks back to how the Founding Fathers ensured free press protection with the First Amendment and provided subsidies to the burgeoning print press of the young nation.

John Nichols, a pioneering political blogger, has written the Nation's Online Beat since 1999, is their Washington DC correspondent, and is a contributing writer for the Progressive and In These Times. He is also the associate editor of the Capital Times, the daily newspaper in Madison, Wisconsin and a co-founder of Free Press. His articles have appeared in the New York Times, Chicago Tribune, and dozens of other newspapers, and he is frequently appears on MSNBC, NPR, BBC and other broadcast media outlets as a commentator on politics and media issues. Nichols lives in Madison, WI and Washington DC.

Robert W. McChesney is the Gutgsell Endowed Professor in the Department of Communication at the University of Illinois at Urbana-Champaign and the author or editor of twenty-three books. His work has been translated into thirty languages. He is the co-founder of Free Press, a national media reform organization. In 2008, the Utne Reader listed McChesney among their "50 visionaries who are changing the world." He lives in Madison, WI.