The Goldstone Report: The Legacy of the Landmark Investigation of the Gaza Conflict (Paperback) 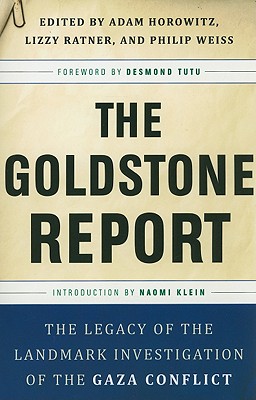 The Goldstone Report is one of the most controversial UN reports ever published. It alleges that both Israel and Hamas committed atrocities during Israel's 2009 incursion into Gaza, with Israel aiming to "punish, humiliate and terrorise a civilian population." This characterization incited an uproar in Israel and abroad. Unfortunately, the controversy surrounding the findings supplanted any real understanding of their implications. Edited by three progressive American Jews, The Goldstone Report contains analysis; commentary by Desmond Tutu, Naomi Klein, and Rashid Khalidi, among others; and a context for debate.

Adam Horowitz lives in New York City, where he is co-editor of Mondoweiss. Horowitz is the former Director of the Israel/Palestine Program for the American Friends Service Committee. He holds a master's degree in Near Eastern Studies from New York University.

Philip Weiss is an investigative journalist who has written for the New York Observer, the Nation, the American Conservative, National Review, Washington Monthly, New York Times Magazine, Esquire, Harper's, and Jewish World Review. He also wrote the 2004 book American Taboo: A Murder In The Peace Corps. He is the founder of a popular news website, Mondoweiss, devoted to covering American foreign policy in the Middle East, chiefly from a progressive Jewish perspective.