Prophets of War: Lockheed Martin and the Making of the Military-Industrial Complex (Paperback) 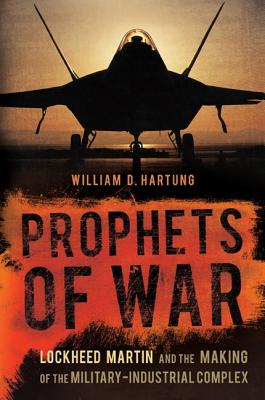 Enthralling and explosive, Prophets of War is an expos' of America's largest military contractor, Lockheed Martin. When President Dwight D. Eisenhower gave his famous warning about the dangers of the military industrial complex, he never would have dreamed that a company could accumulate the kind of power and influence now wielded by this behemoth company.

As a full-service weapons maker, Lockheed Martin receives over 25 billion per year in Pentagon contracts. From aircraft and munitions, to the abysmal Star Wars missile defense program, to the spy satellites that the NSA has used to monitor Americans' phone calls without their knowledge, Lockheed Martin's reaches into all areas of US defense and American life. William Hartung's meticulously researched history follows the company's meteoric growth and explains how this arms industry giant has shaped US foreign policy for decades.

Bill Hartung is the director of the Arms and Security Initiative at the New America Foundation. He has worked for the Council on Economic Priorities and the World Policy Institute doing research and writing on the arms industry and the politics of defense spending. Hartung is the author of two books on the intersection between the arms industry and the shaping of U.S. foreign policy, And Weapons for All and How Much Are You Making on the War, Daddy? -- A Quick and Dirty Guide to War Profiteering in the Bush Administration.

Hartung has written for the New York Times, Washington Post, Los Angeles Times, and the Nation, and has been interviewed by ABC News, CBS 60 Minutes, CNN, Fox News, the Lehrer Newshour, NBC Nightly News, and National Public Radio. His writing on Lockheed Martin has appeared in the Washington Post Outlook section, the Nation, the Multinational Monitor, and the Bulletin of the Atomic Scientists. He lives in New York City.