After Empire: The Birth of a Multipolar World (Paperback) 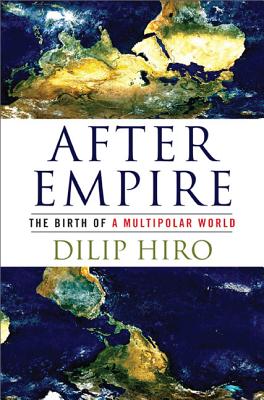 The United States’ victory in the Cold War in 1991 led to triumphalist claims that humanity had reached “the end of history,” and that Washington would enjoy everlasting supremacy. Some years later, U.S. Secretary of State Madeleine Albright called America “the indispensable nation.” And a senior aide to President George W. Bush crowed: “We are an empire now.”

But by invading Iraq, Bush irreparably undermined U.S. credibility worldwide. And by curtailing Americans’ civil liberties in the name of waging an endless “war on terror,” and resorting to torture in the prisons of occupied Iraq, Afghanistan, and Guantánamo Bay, his administration—as well as America—lost its claim to a moral high ground. Moreover, the 2008-2009 global fiscal meltdown, triggered by the sub-prime mortgage crisis on Wall Street, exposed a stark fact: The heavily indebted America had ceased to be the financial behemoth it had been since World War II.

After Empire sketches the contours of a complex world system emerging during the late imperial phase of the U.S. It examines, critically, the events that prepared the ground for the world to move from the tutelage of the sole superpower, America, to a multipolar, post-imperial global order. Refreshingly, it does so from a distinctly non-Western perspective.

Unlike other scholars, Dilip Hiro—one of the world’s leading experts on the geopolitics of hydrocarbons as well as the Middle East and South and Central Asia—does not offer a comforting thesis that the U.S. is quite capable of accommodating the rising world powers like China, Russia, India, and the European Union while retaining its dominant position at the table.

Neither does he frame global politics in a Manichean way—America versus China; the West against Asia. The world, he suggests, is set to revisit the pre-World War I Europe, where rulers frequently changed allies and adversaries to achieve the shared aim of keeping the continent free of an overarching power—to date, a privilege enjoyed globally by America.

With more than two trillion dollars in its foreign reserves, China’s state-owned corporations are busily buying up companies worldwide. By surpassing Saudi Arabia in its oil output, Russia, the number one producer of natural gas, is now the world’s foremost producer of hydrocarbons. Its nuclear arsenal is on par with America’s. Elsewhere the hydrocarbon-rich nations of Venezuela and Iran are challenging the Washington-dominated status quo respectively in South America and the Middle East. Already, the 27-nation European Union of nearly 500 million has surpassed America as the globe’s largest trading entity, and the euro has emerged as a strong rival to the U.S. dollar as a dominant reserve currency.

After Empire is realistic and nuanced in its assessment of global politics. Shorn of an ideological bias or a soft corner for America, it abounds in unsettling and stimulating insights on politics, history, hard and soft power, political economy and democracy.

Dilip Hiro is one of the world's leading experts on the Middle Eastern, Central and South Asian, and Islamic affairs. His thirty-four books include Inside India Today, The Timeline History of India, Inside Central Asia, and Apocalyptic Realm: Jihadists in South Asia. He contributes to the New York Times, Guardian, Observer, Nation, and Los Angeles Times as well as Salon, TomDispatch, and YaleGlobal. He is a commentator for CNN, the BBC and Al Jazeera English.