Ajax, the Dutch, the War: The Strange Tale of Soccer During Europe's Darkest Hour (Paperback) 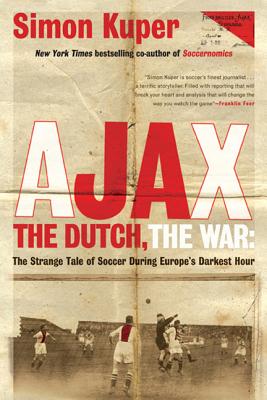 
When most people think about the Netherlands, images of tulips and peaceful pot smoking residents spring to mind. Bring up soccer, and most will think of Johan Cruyuff, the Dutch player thought to rival Pele in preternatural skill, and Ajax, one of the most influential soccer clubs in the world whose academy system for young athletes has been replicated around the globe (and most notably by Barcelona and the 2010 world champions, Spain).

But as international bestselling author Simon Kuper writes in Ajax, The Dutch, The War: Soccer in Europe During the Second World War, the story of soccer in Holland cannot be understood without investigating what really occurred in this country during WWII. For decades, the Dutch have enjoyed the reputation of having a "good war." The myth is even resonant in Israel where Ajax is celebrated. The fact is, the Jews suffered shocking persecution at the hands of Dutch collaborators. Holland had the second largest Nazi movement in Europe outside Germany, and in no other country except Poland was so high a percentage of Jews deported.

Kuper challenges Holland's historical amnesia and uses soccer -- particularly the experience of Ajax, a club long supported by Amsterdam's Jews -- as a window on wartime Holland and Europe. Through interviews with Resistance fighters, survivors, wartime soccer players and more, Kuper uncovers this history that has been ignored, and also finds out why the Holocaust had a profound effect on soccer in the country.

Ajax produced Cruyuff but was also built by members of the Dutch resistance and Holocaust survivors. It became a surrogate family for many who survived the war and its method for producing unparalleled talent became the envy of clubs around the world. In this passionate, haunting and moving work of forensic reporting, Kuper tells the breathtaking story of how Dutch Jews survived the unspeakable and came to play a strong role in the rise of the most exciting and revolutionary style of soccer -- "Total Football" -- the world had ever seen.

Simon Kuper is one of the world's leading writers on soccer. The winner of the William Hill Prize for sports book of the year in Britain, Kuper writes a weekly column for the Financial Times. He lives in Paris, France.

“I have only bought one football book recently and it's an absolute belter…heartily recommended.” Glasgow Herald“Gripping and brilliant.” Financial Times“An intriguing social history, full of quirky anecdotes, written with a winning geniality and the dash of a Brazilian forward…a beguiling book.” Spectator“A fascinating tale, which Kuper describes particularly well.” GQ“Kuper's poignant and perceptive account again proves there can be more to football writing than fanzines and pale Hornby imitations.” Telegraph“A fascinating history, full of startling facts and sobering detail.” Time Out“Kuper has fashioned a work which brilliantly juxtaposes the everyday life of football clubs with the awful fate suffered by so many of their Jewish players, officials, and supporters.” Independent
“An intriguing work.”

The Forward“[Kuper] is the world expert on the intersection of soccer, culture and politics.”
World Football Commentaries

“[Kuper] is a tenacious digger….his work is indispensable today.” Kirkus Reviews“Though Kuper's book promises to explore the history of Ajax and other soccer clubs, it goes much deeper….[Kuper] kicks topics around the way Maradona smacks a ball, sometimes with a great roundabout curve to it—but always hitting the goal….fascinating.” Franklin Foer, author of How Soccer Explains the World“This book is filled with reporting that will break your heart and analysis that will change the way you watch the game.” Daily Telegraph“His fresh-eyed survey has a familiar theme but never palls, crowded with a gallery of unlikely figures…whose stories weave through the book.” The Times

“[W]orthy (and decidedly different) nonfiction…. Simon Kuper's Ajax, The Dutch, The War: The Strange Tale of Soccer During Europe's Darkest Hour is a smart, sometimes horrifying look at soccer in the 1930s and 1940s, primarily in nations occupied by the Nazis. I've read a couple of Kuper's other books, and as with them, I was impressed with his ability to place compelling sports narratives into a larger geopolitical context.” International Soccer Network“Another masterpiece from Simon Kuper….Kuper, one of the most prominent writers in the soccer business, tackles the difficult task of finding out the truth behind what the Dutch did and didn't do in WWII and the role soccer may have played in the grand scheme of things. Kuper becomes historian, investigative journalist, and storyteller all wrapped into one….Simply put this text is extremely powerful….It is impossible to truly understand Dutch soccer without first reading this book. If you liked David Winner's Brilliant Orange, you will absolutely fall in love with Kuper's Ajax, the Dutch, the War. It's that good.” The Volunteer

Booklist(Published in the UK by Orion)“Kuper's journalism is always about more than just the game itself….It's a fascinating exploration by a journalist who holds no truths to be self-evident but wants the facts behind the national myths we so eagerly embrace. Likely to interest WWII and Holocaust scholars as much as—if not more than—soccer fans.” The Classical“Ajax is an absorbing, thoughtful read, driven by a moral intelligence not typically found in sports books…. The resulting book is not about 4-4-2 formations, transfers, or sporting glory—Kuper instead uses the game as a lever to open up a serious but engaging discussion of collective memory, group identity, the legacy of the Holocaust and the war, and what games can stand for beyond the pitch. Any intelligent sports fan not familiar with Kuper's work is missing out, and Ajax more than lives up to his high standard.” Tobias Carroll, Vol. 1 Brooklyn