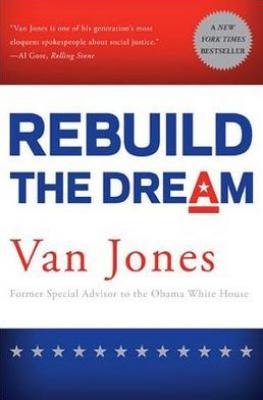 In Rebuild the Dream, green economy pioneer Van Jones reflects on his journey from grassroots outsider to White House insider. For the first time, he shares intimate details of his time in government -- and reveals why he chose to resign his post as a special advisor to the Obama White House.

Jones puts his hard-won lessons to good use, proposing a powerful game plan to restore hope, fix our democracy and renew the American Dream. The American Dream means different things to people, but the center of gravity is always the same: an ordinary person -- who was not born with great wealth, but who is willing to work hard and play by the rules -- should be able to find employment, live in a good community, make progress financially, retire with dignity, and give his or her children a better life. That dream is fading. On Main Street, too many people are working harder than ever -- while falling further behind. They play by the rules, but cannot succeed. At the same time, other Americans, including the worst of Wall Street, break every rule, but cannot fail -- because someone has already decided that they are "too big" to fail. The American Dream has been turned upside down and inside out. It is time to set things right. As the first Obama administration official to write a book about his experiences, Jones offers a unique perspective. In explaining why the 2008 "hope" bubble burst, he unveils the seven biggest mistakes made by the White House and its supporters. He explores the origin and fate of the movements that helped to elect President Obama, as well as those that have challenged and shaped his presidency. Along the way, Jones systematically reveals surprising parallels between Obama's people-powered campaign, the Tea Party and Occupy Wall Street. At this pivotal moment, Jones argues that we must make our economy respect the 99% and work for the 100%, not just the 1%. He proposes serious solutions that fit the scale of our problems. Rebuild the Dream sets forth bold ideas inspired by the progressive values that made the twentieth century the "American Century." It shows how key public policies and investments can create millions of good, American jobs. America is still the best idea in the world. The American middle class is still her greatest invention. Rebuild the Dream is dedicated to the proposition that -- with the right strategy -- both can be preserved and strengthened for generations to come.

Van Jones is founding president of Rebuild the Dream, a pioneering initiative to restore good jobs and economic opportunity. He is the co-founder of three, thriving organizations: the Ella Baker Center for Human Rights, Color of Change, and Green For All. Jones is the author of the New York Times bestseller, The Green Collar Economy.

A Yale-educated attorney, Van worked as the green jobs advisor to the Obama White House in 2009. There, he helped run the inter-agency process that oversaw eighty billion in green recovery spending. Time Magazine has named Jones one of the 100 most influential people in the world. He lives in Los Angeles with his wife and two children.

Rebuild the Dream is a strategy and action center that is rapidly emerging as a major force in the fight to rescue America's middle class. Launched in June 2011, the organization is already more 600,000 members strong, with a presence in every Congressional District. To join the movement, go to RebuildTheDream.com.

“This guy is a Yale-educated lawyer, he is a best-selling authority about his specialty.”
—Howard Dean, Former Governor of Vermont, Presidential Candidate and Chair of the Democratic National Committee

“Van is a gifted leader of ideas and of action. He makes connections, thinks beyond the box, and inspires others to join… He inspired people across the country with the insight that the transition to a sustainable economy could be the greatest jobs program since the mobilization for World War II – and that we could insure that those who were left out of the old economy could be central to the green jobs of the new economy.”
—Robert Borosage, President of Institute for America's Future

“Van Jones has made it his life's work to speak truth to power”—Nancy Pelosi in Time Magazine "Van Jones is an American treasure … one of the few Americans in recent years to have generated powerful new ideas that are creating more jobs here.”—Benjamin Todd Jealous, NAACP President, on CNN.com “Van has successfully brought together urban youth with clean-tech entrepreneurs, labor leaders with business leaders, civil rights activists with environmentalists.”—Arianna Huffington, on the Huffington Post “Van Jones is an exceptional and inspired leader who has fought to bring economic and environmental justice to communities across our country.”—John Podesta, President of the Center for American Progress
“Van Jones has worked tirelessly to bring jobs and environmental progress to some of the poorest communities in our nation. His dedication and leadership are exactly what we need more of in Washington.”
—Justin Ruben, Executive Director of Moveon.org

“Jones is an extraordinarily important leader. He cares, passionately, about helping young men and women find their way in the world, even if they had the misfortune to grow up in bad neighborhoods or make bad choices – and he sees in a new green economy a powerful instrument to heal their lives.”
—Carl Pope, Executive Director of the Sierra Club