Diversity, Inc.: The Fight for Racial Equality in the Workplace (Paperback) 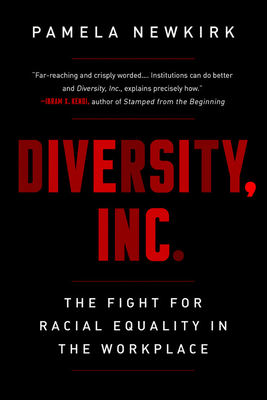 One of Time Magazine's Must-Read Books of 2019: An award-winning journalist shows how workplace diversity initiatives have turned into a profoundly misguided industry—and have done little to bring equality to America's major industries and institutions.

Diversity has become the new buzzword, championed by elite institutions from academia to Hollywood to corporate America. In an effort to ensure their organizations represent the racial and ethnic makeup of the country, industry and foundation leaders have pledged hundreds of millions of dollars to commission studies, launch training sessions, and hire consultants and diversity czars. But is it working?

In Diversity, Inc., award-winning journalist Pamela Newkirk shines a bright light on the diversity industry, asking the tough questions about what has been effective—and why progress has been so slow. Newkirk highlights the rare success stories, sharing valuable lessons about how other industries can match those gains. But as she argues, despite decades of handwringing, costly initiatives, and uncomfortable conversations, organizations have, apart from a few exceptions, fallen far short of their goals.

Diversity, Inc. incisively shows the vast gap between the rhetoric of inclusivity and real achievements. If we are to deliver on the promise of true equality, we need to abandon ineffective, costly measures and commit ourselves to combatting enduring racial attitudes.

Pamela Newkirk is a New York University professor of journalism and award-winning journalist who has written extensively about diversity in the news media and art world. Her first book, Within the Veil: Black Journalists, White Media (NYU Press) examined the tumultuous entry of African American journalists into mainstream journalism. The book, based on archival research and interviews with more than one hundred journalists across the country, won a National Press Club Award for media criticism and continues to be widely adopted by colleges and universities.

Her most recent book, Spectacle: The Astonishing Life of Ota Benga (HarperCollins) uncovered the story of the young African who in 1906 was exhibited in the Bronx Zoo monkey house. The book, based almost exclusively on archival research, was included on a number of Best of 2015 lists, including NPR's, the San Francisco Chronicle's and the Boston Globe's and won an NAACP Image Award for literature and the Zora Neale Hurston/Richard Wright Foundation Legacy Award. The book has also been optioned for film and stage by producer Scott Rudin. Newkirk's articles and reviews are regularly published in major media, including the Washington Post, the New York Times, The Guardian, The Nation, andthe Chronicle of Higher Education.

"A gripping, sobering analysis of why US institutions and corporations
have made such slow progress towards any meaningful racial diversity.... A
must-read."—Financial Times

"By reminding readers of the stories of people like Ingram and Roberts, dedicated employees who endured unthinkable humiliation - the 'uncivil' ways in which they were treated, simply because of their race - Diversity, Inc. may do more to help advance the cause of workplace inclusion than any canned bias-training program ever could."—Washington Post

"In Diversity, Inc., journalist Pamela Newkirk interrogates a shameful reality.... Newkirk's well-researched facts and figures paint a picture of stagnation that's hard to deny. Diversity, Inc. is a damning look at American organizations and a reminder that our workplaces are far from reflective of our country."—Time, "Must-Read Books of 2019"

"A must-read.... a well-sourced and succinctly written report that addresses the overall lack of progress in three key sectors: academia, corporate America, and the Hollywood entertainment establishment...The book is valuable for many reasons, not the least of which is the context Newkirk provides."—Fortune

"Pamela Newkirk has written the far-reaching and crisply worded book I had been waiting to read. Cheap diversity statements and costly diversity consultants are not working and Newkirk explains precisely why. Institutions can do better and Diversity, Inc., explains precisely how."—Ibram X. Kendi, National Book Award-winning author of Stamped from the Beginning and How to Be an Antiracist