My Turn: A Life of Total Football (Paperback) 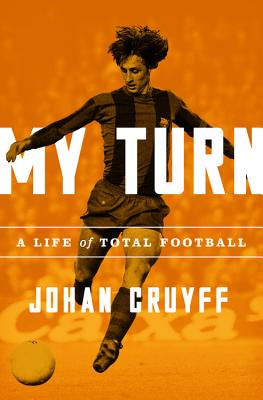 The autobiography of Dutch soccer legend Johan Cruyff, whose remarkable life and impeccable style have influenced star players and clubs for decades

Johan Cruyff embodied a footballing philosophy that now dominates coaching and playing styles in all the leading club sides around the world. You can dispute whether Cruyff was the greatest player ever -- he was certainly one of the top three -- but he is undoubtedly the player who single-handedly changed the nature of the game.

My Turn tells the story of Cruyff's remarkable career, built on the techniques he learned playing in the streets of postwar Amsterdam while hoping to be noticed by the city's famous club, Ajax. He would eventually inspire that team to eight league championships and three European cups. He won his first of three Ballons d'Or at twenty-four in 1971. In 1973, Cruyff was sold to Barcelona for a world-record transfer fee. He led the Catalans to victory in La Liga for the first time since 1960, and went on to leave a lasting mark on Spanish soccer. In the 1974 World Cup, Cruyff propelled the Dutch team to the final for the first time.

Cruyff's lasting influence, however, is not in the medals he won, but in the style of play he epitomized and then applied to the Barcelona and Ajax teams he coached. His vision of "Total Football" transformed the way soccer was played, and its dazzling fluidity became the basis of the most admired sides around the world. He was the sport's uncompromising genius on and off the field of play.

Johan Cruyff (1947-2016) played for and coached Ajax and Barcelona. In his retirement, he managed the Cruyff Foundation, the Cruyff Institute, Cruyff Classics, and the Cruyff Library, and wrote a weekly column for De Telegraaf. Cruyff passed away in March 2016 in Barcelona.

"Johan Cruyff painted the chapel, and Barcelona coaches since merely restore or improve it"- Pep Guardiola on Cruyff's work at the Nou Camp.
"He is like the Godfather of Dutch football" - Frank Rijkaard.
"Pythagoras in boots. Few have been able to exert, both physically and mentally, such mesmeric control on a match from one penalty area to another" - David Winner, author of Brilliant Orange.
"He was at the heart of a revolution with his football. Ajax changed football and he was the leader of it all. If he wanted he could be the best player in any position on the pitch" - Eric Cantona.
"The proudest moment of my career. I thought I'd win the ball for sure, but he tricked me. I was not humiliated. I had no chance. Cruyff was a genius." - Jan Olsson, the Sweden defender who was tricked by the Cruyff Turn at the 1974 World Cup.
"As a player he turned football into an art form. Johan came along and revolutionised everything. The modern-day Barca started with him, he is the expression of our identity, he brought us a style of football we love" - the former Barcelona president Joan Laporta.
"He has had the biggest influence on football out of anyone in the world, first as a player and then as a coach." - Guardiola again.