Zonal Marking: From Ajax to Zidane, the Making of Modern Soccer (Paperback) 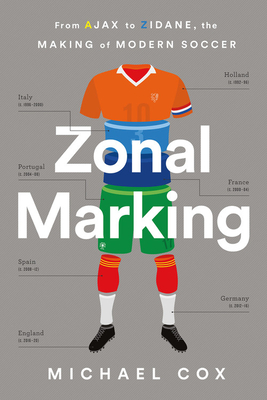 A mazy dribble through the recent history of European soccer, showing how shifting styles and influence have shaped the game.

In the early 1990s, the Dutch footballing philosophy was worshipped across the continent. Then the baton passed to the Italians, who clearly boasted Europe's strongest league. But when France started winning everything at the international level its national academy became the template for others, until suddenly, almost out of nowhere, Europe's most revered player and manager both hailed from Portugal. Next, Barcelona and Spain won everything during a very obvious four-year period of dominance, before tiki-taka's decline meant Bayern and Germany took control. Finally, Europe's most successful coaches found themselves competing in England, introducing a brilliant cacophony of styles to the Premier League.

Zonal Marking is a glorious travelogue through soccer's triumphant styles and characters.

Michael Cox is one of the most respected soccer journalists working today and he has made his name through writing highly entertaining in-depth tactical analysis. He is the editor of Zonal Marking, a football blog dedicated to tactics, and writes regularly for the Guardian and ESPN.