It's Up to the Women (Paperback) 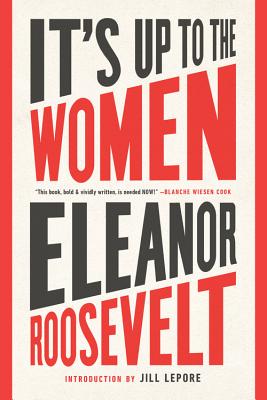 "Eleanor Roosevelt never wanted her husband to run for president. When he won, she . . . went on a national tour to crusade on behalf of women. She wrote a regular newspaper column. She became a champion of women's rights and of civil rights. And she decided to write a book." -- Jill Lepore, from the Introduction

"Women, whether subtly or vociferously, have always been a tremendous power in the destiny of the world," Eleanor Roosevelt wrote in It's Up to the Women, her book of advice to women of all ages on every aspect of life. Written at the height of the Great Depression, she called on women particularly to do their part -- cutting costs where needed, spending reasonably, and taking personal responsibility for keeping the economy going.

Whether it's the recommendation that working women take time for themselves in order to fully enjoy time spent with their families, recipes for cheap but wholesome home-cooked meals, or America's obligation to women as they take a leading role in the new social order, many of the opinions expressed here are as fresh as if they were written today.

Eleanor Roosevelt (1884-1962) was an American politician, diplomat, and activist. She was the longest-serving First Lady of the United States, holding the post from March 1933 to April 1945. She made Gallup's list of "People that Americans Most Widely Admired in the 20th Century," and Time's "The 25 Most Powerful Women of the Past Century."

Jill Lepore is the Kemper Professor of American History at Harvard and a staff writer at the New Yorker. Her books include The Name of War (1998), which won the Bancroft Prize; New York Burning (2005), which was a finalist for the Pulitzer Prize in history; The Story of America (2012), which was short-listed for the PEN Literary Award for the Art of the Essay; Book of Ages (2013), a finalist for the National Book Award; and The Secret History of Wonder Woman (2014). Lepore is the David Woods Kemper '41 Professor of American History at Harvard University. In 2012, she was named a Harvard College Professor, in recognition of distinction in undergraduate teaching.

"Eight decades after the Great Depression, American women are facing yet another test of courage and ingenuity. Eleanor Roosevelt's advice to women living through the world's greatest economic crisis remains relevant, comforting, and, for all of its practicality, profoundly inspiring."—Amanda Foreman, bestselling author of Georgiana and A World On Fire

"In l933, Eleanor Roosvelt launched her first book to galvanize an urgent movement for democracy, peace and freedom. As fascism threatened the world, she believed women's activism would save the future... This book, bold and vividly written, is needed NOW!"—Blanche Wiesen Cook, Distinguished Professor of History at John Jay College and author of a prize-winning three-volume biography of Eleanor Roosevelt

"It's Up to the Women challenges us anew to foster community, adhere to the highest standards of ethics, raise fearless children with a concern for the world, and embrace and act on the notion that it is 'the attitude of women towards changes in society [that] is going to determine to a great extent our future in this country.' Inspiration for the work ahead is found here, in wise advice for women in the 1930s."—Julia Stasch, President, John D. and Catherine T. MacArthur Foundation

"This must-read primer by America's greatest first lady is so much more than quaint, decades-old history. [It's Up to the Women] powerfully reminds us of how much women have achieved since Eleanor's time-and how much more must be done to secure the level playing field she advocated. Ably reintroduced by the brilliant Jill Lepore, this book is as timely now as when it first appeared in the depths of the Depression.. . . What Eleanor advised women then remains truer than ever today: our mission will only be fulfilled when 'we can say we never saw a wrong without trying to right it.'"—Jennifer J. Raab, President, Hunter College and founder of Roosevelt House at Hunter

"Whatever the topic, Roosevelt's advice is insistently practical... wholesome and heartening."—Kirkus Reviews

"Inspirational at times, It's Up to the Women is also deeply practical...The foundational message rings as loudly as it did nearly a century ago: that women 'have always been a tremendous power in the destiny of the world.'"—John Williams, New York Times Book Review

"Roosevelt writes passionately about work-life balance-among dozens of other push/pull matters of the heart and mind. Her book is a reminder of how long we've been grappling with equality, justice and social responsibility inside and outside our homes....Read through the lens of 2017 perspective, her words offer a set of guiding principles that seem almost prescient."—Heidi Stevens, Chicago Tribune

"Roosevelt was writing to the women caught in the grip of the Great Depression. But her words echo across time. It is up to the women..."—Lyz Lenz, The Rumpus

"An eclectic assortment of wisdom...Even by modern standards, It's Up to the Women still yields plenty of good, common sense advice for women and men alike, on everything from health to parenting to doing one's civic duty."—Mental Floss