Take Me Out to the Ballpark Revised and Updated: An Illustrated Tour of Baseball Parks Past and Present Featuring Every Major League Park, Plus Minor League and Negro League Parks (Paperback) 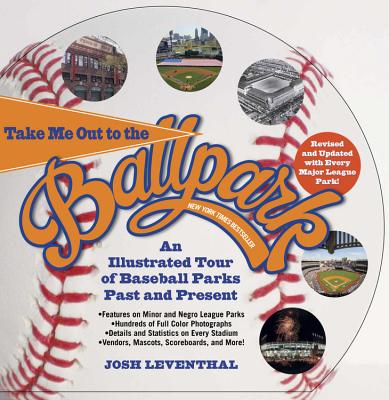 Take Me Out to the Ballpark is the fans' favorite guide to everything you'd ever want to know about Major League ballparks, from Fenway to AT&T Park and every green diamond in between. Originally published more than ten years ago, this long-awaited paperback edition has been completely updated. Every ballpark built by spring 2011 is here, including the new Yankee Stadium (New York), Citi Field (New York), Nationals Park (Washington, D.C.), Target Field (Minneapolis), and Busch Stadium III (St. Louis). All of the park names have also been updated, including Progressive Field (Cleveland), Sun-Life Stadium (Miami), Rangers Ballpark in Arlington, Chase Field (Phoenix), AT&T Park (San Francisco), and Oakland Coliseum. Also covered are minor league and Negro league parks, as well as bygone parks of previous decades.

Each park is featured as a large, full-color photograph along with additional photographs that illustrate its details or great moments in its history. The text includes essential information and stats? Dimensions, fence heights, seating capacity, cost of construction, largest crowd? Plus dozens of fascinating, often little-known stories and facts, such as the escapades of famous players and the park's peculiar idiosyncrasies. Special sections feature information on scoreboards, mascots, announcers and organists, the evolution of ballpark names, concessions, and groundskeepers.

Including more than 400 full-color and black-and-white photographs, plus seating plans for every current park, Take Me Out to the Ballpark is the ultimate book for the ultimate fan.

Josh Leventhal is an editor and the author of the best-selling book Take Me Out to the Ballpark, The World Series: An Illustrated History of the Fall Classic, and Baseball Yesterday & Today, among others. He lives in Minneapolis, Minnesota.